PMA wants to be world-class 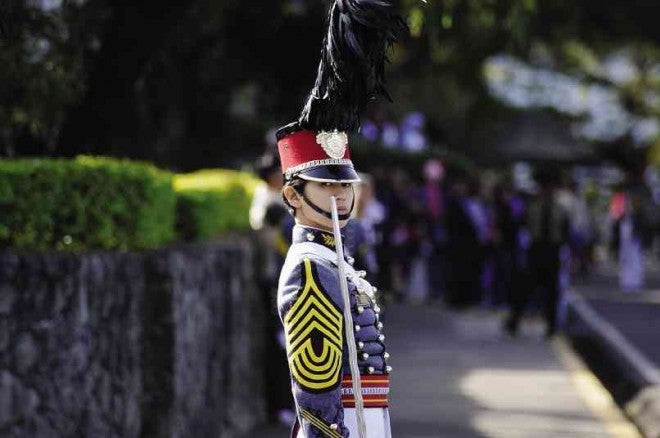 First Class Cadet Kerlyn Kaye Asuncion, the first female cadet to be appointed adjutant of the Corps of Cadets, performs the amusing Adjutant’s Strut during a parade at the Philippine Military Academy. Female cadets were first introduced into the academy in 1993. EV ESPIRITU/INQUIRER NORTHERN LUZON

The PMA first embarked on reforming its curriculum in 2005 during the term of retired Lt. Gen. Cristolito Balaoing and his successor, retired Maj. Gen. Leopoldo Maligalig, who designed the PMA Roadmap 2015. It was the guideline for converting the PMA into a leadership training facility, a task drawn up from a series of stakeholders’ consultations began by another former superintendent, retired Lt. Gen. Edilberto Adan.

The turnover ceremony for the new superintendent took place on the same day the academy hosted this year’s PMA alumni homecoming.

In his homecoming address, Abogado said the new roadmap would allow the academy to achieve “what it dreamed to be, as we envision an institution that is at par with different military academies in the world.”

“But in doing so, the academy needs more support,” Abogado said. “I encourage everyone [to help the PMA] in achieving this vision. The future of our alma mater is within the hands of those who care for it, and who else but its children [whom the PMA] reared and who blossomed from its grounds,” he said.

Abogado said donations coursed through the Philippine Military Academy Alumni Association had been used to improve classrooms, cadet barracks and the academy’s water facilities during his term as superintendent.

The PMA’s classes also adopted portions of the academy to finance improvements in sections of the campus, he said.

“The PMA should be a world-class academy that we should be proud of … In fact, there are foreign cadets who are again willing to be trained in the academy, so the PMA is starting to be known again as an international training academy for the military,” Lopez said.

The PMA has existing pacts with other military academies, which allow an exchange of cadets. The same agreement requires the PMA to accept cadets from other countries.

Lopez, a member of PMA Dimalupig Class of 1981, said his classmates included three cadets from Malaysia, Singapore and Thailand. He said the PMA has three foreign cadets in its current roster.

Lopez said the new PMA roadmap would maintain the system developed by the first document. “We have a review of the curriculum from time to time,” he said.

“We have to select the best and the brightest among our youth. Even in past administrations, we were aggressive with our recruitment. We visit universities and schools.”—Desiree Caluza with a report from Vincent Cabreza