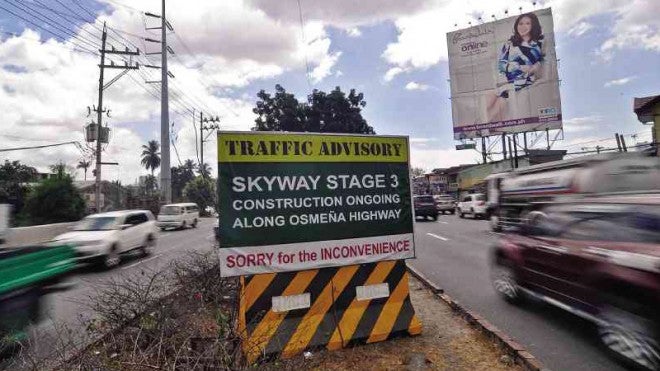 OMINOUS SIGN. Looking more like a warning to motorists, a traffic advisory for the construction of the Skyway Stage 3 project starting on Monday night is displayed along Osmeña Highway in Manila. RICHARD A. REYES

MANILA, Philippines—Are you ready for some truly monstrous traffic jams and “bear with the short-term inconvenience,” as Malacañang pleaded Sunday?

Construction of two major government infrastructure projects starts Monday night, and it is expected to worsen metropolitan traffic throughout the remainder of the Aquino administration.

The Metropolitan Manila Development Authority (MMDA) earlier projected that on Edsa alone, vehicular traffic could slow down to only 1 to 9 kilometers per hour.

Roadwork on the six-lane expressway being built by the Department of Transportation and Communications (DOTC) connecting South Luzon Expressway from Buendia in Makati to North Luzon Expressway on Balintawak in Quezon City will start at 10 p.m.

That’s on top of the project connecting the Ninoy Aquino International Airport Expressway Phase 2 of the Department of Public Works and Highways (DPWH) to the seaside Entertainment City.

Malacañang spokesman Herminio Coloma on Sunday sought understanding from the public, citing in particular the traffic congestion that would be caused by the construction of the 14.8-kilometer Metro Manila Skyway Stage 3 project.

“We call on our people to share in the burden of sacrifice and bear with the short-term inconvenience so we can build better roads that will ensure faster travel and more productive living in our highly congested National Capital Region,” Coloma said on Radyo ng Bayan.

“For the benefit of the people and to avoid adding to the traffic problem on Edsa,” the main rites marking the 28th anniversary of the Edsa People Power Revolution would be held at the Palace grounds—not on the historic thoroughfare—on Feb. 25, he said.

But has the government, particularly the MMDA, sufficiently prepared for the heavy traffic?

Quoting MMDA Chairman Francis Tolentino, Coloma cited the two-day Metro Traffic Management Summit at the Asian Institute of Management in Makati that closed on Friday—just three days before all hell is expected to break loose.

The summit involved “all stakeholders” and was “well-covered by trimedia,” Tolentino said in a text message forwarded by Coloma.

As of Sunday afternoon, the website that the MMDA put up to update the public on the status of all 15 infrastructure projects to be implemented this year went kaput.

Launched during the traffic summit, the website (www.mmroadway.com) was supposed to provide traffic situation in areas to be affected by the projects.

In the agency’s official website (www.mmda.gov.ph), there’s a Jan. 23 press release wherein Tolentino asked the public “to make adjustments in their work and travel schedules and personal lifestyles to cope with the expected traffic congestion in Metro Manila to be brought about by the impending construction of Skyway Stage 3 project.”

“What we need is extra huge-amount of patience and understanding and cooperation but once Skyway 3 is completed, it will result in faster and more convenient travel within the metropolis,” he said.

Also contained in the website was its latest “traffic advisory” dated Oct. 24 last year. It was about the “road reblocking and repair” to be done by the DPWH from Oct. 26 to 29, 2013.

Another traffic advisory, dated Oct. 7, 2013, was about the closing of three U-turn slots in Quezon City.

Last week, the MMDA went on a last-minute brainstorming.

It raised the possibility of a four-day school week to help minimize traffic congestion, especially since the Skyway project would affect 23 schools. This was roundly nixed by private schools. Another suggestion was to hold classes on campuses outside of Metro Manila.

On the MMDA website, Tolentino asked private companies to adopt a flexible work schedule—“flexitime”—“for their employees, especially those located along the route of the construction projects.”

And yet another bright idea popped up: Resume operation of the Pasig ferry boat.

All of these measures were announced a few days before the expected massive gridlock, indicating that the MMDA was totally unprepared to deal with the problem that, according to a study conducted by the Japan International Cooperation Agency, was causing losses amounting to P2.4 billion a day in potential income.

Tolentino said nothing about getting “colorum buses” off the roads, enforcing strictly traffic rules, especially on yellow blocks in key intersections, loading and unloading zones, conducting an honest-to-goodness examination of car license applicants and preventing morons on the loose in the streets, and expanding the capacity of the woefully crammed mass transit systems.

“It’s a no brainer that we need to boost infrastructure,” said Socioeconomic Planning Secretary Arsenio Balisacan in July 2013. “We have a huge backlog in almost all types of infrastructure.”

In what officials themselves describes as the “last two minutes” of the Aquino administration, the government intends to build more roads, bridges, railways, airports and seaports.

That the DOTC and the DPWH announced that work would be done “24/7” nevertheless elated Tolentino.

He also talked about participants in the summit last week—representatives of the DPWH and the DOTC, local government units, and stakeholders from the academe, transport and business sectors—agreeing to map out “a unified traffic management plan” for Metro Manila, in preparation for the 15 projects some of which could take up to 2018 to complete.

Also discussed were other traffic alleviation measures such as the revival of the Pasig ferry service and additional bike lanes; Tolentino’s proposed four-day work and schools weeks, the lifting of window hours for the number-coding scheme, and “car-less” days at least once a week on Edsa.

When the unified traffic management plan will be unveiled to the public remained unclear on the eve of the expected start of gridlock.

Read Next
Ex-PNP top exec tells critics: Give me a chance
EDITORS' PICK
Omicron: What science knows so far about latest Greek-lettered COVID variant
DOH: Booster doses for fully vaxxed adults to start December 3
This new condo in the South will make you want to turn a new leaf
NGCP transmission tower in Lanao del Sur bombed
Legarda: Ending Violence Against Women, a cause for all
Smart offers wireless fiber-like speeds to Filipino homes with country’s first 5G Prepaid Home WiFi
MOST READ
‘Maski na hindi ‘yung mga bright’: Duterte urges public to elect new leaders
Pacquiao to voters: If you can’t vote for me, then don’t vote for a corrupt candidate
Sereno warns: Those accusing Kris Aquino of ‘stealing’ Marcos jewels will face criminal case
Roque defends Bongbong Marcos: ‘He was only 15 years old in 1972’
Don't miss out on the latest news and information.