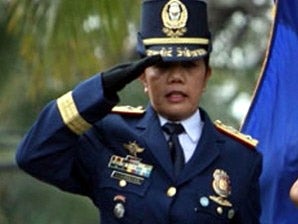 MANILA, Philippines—“Give me a chance.”

Former Philippine National Police Director Lina Sarmiento on Sunday called on her critics to give her an opportunity to prove her worth as head of the Human Rights Victims’ Claims Board, which would oversee the distribution of P10 billion in compensation to victims of military abuse during the ironfisted rule of President Ferdinand Marcos.

Former political detainees and victims of military torture in Mindanao have criticized Sarmiento’s appointment, questioning the choice of a former high-ranking PNP official to head a group whose job is to deal with people who suffered abuse in the hands of police during Marcos’ martial rule.

Sarmiento defended herself, saying her experience in the PNP Human Rights Affairs Office would greatly help her carry out her new responsibilities.

“I don’t want to pick a fight with anybody. It would be better if we could all work together to help human rights victims get what is due them,” Sarmiento said in a telephone interview with the Inquirer.

“Anyway, the purpose of the distribution of the compensation (for martial law victims) is also for healing and reconciliation. I don’t think quarreling can do us any good,” she said.

She said she had never been accused of violating human rights.

Sarmiento, who has a degree in chemistry, joined the police service in 1980, working in the PNP crime laboratory and moving up the ranks to become the Philippines’ first female police general.

She bowed out of the service earlier this month, ahead of her scheduled retirement in September, still the PNP’s only female director, with two-star rank, the equivalent of  major general in the military.

Sarmiento does not consider her appointment to the claims board controversial, even with her police background.

“I’m just one of the nine members of the board. As stated in the law, our work is very clear—to receive, assess, evaluate, investigate and process applications for compensation of victims of human rights violations,” she said.

Rosales described Sarmiento’s last job as “decent,” the office being mandated to help “demilitarize” the remnants of the “militarized forces” in the police agency and to “civilianize and democratize” the force.

But the critics are not letting up, with Bayan Muna Rep. Neri Colmenares filing a resolution for a congressional look into the appointment of the claims board, particularly that of Sarmiento, on grounds that she does not meet the qualifications as prescribed under the Human Rights Victims Reparation and Recognition Act.

Colmenares said Sarmiento did not possess these qualifications.

“How can the chair of a human rights board come from an agency historically and currently used for rampant human rights violations?” he said.

He said President Aquino should instead appoint someone who personally saw and experienced the horrors of the Marcos regime, someone “who is honed in human rights work” to lead the claims board.

The President, who signed the reparations law on Feb. 25 last year, announced the appointment of Sarmiento to the claims board on Feb. 13.

“The (claims) board is tasked with reviewing human rights cases mostly committed by the state (the military, the police), and he assigns a person from the ranks of the perpetrators, even heads it?” Ilagan said.

“Where is the logic or the sense of fairness or justice the victims are hoping for?” she said.

Fe Salino, secretary general of the political detainees’ group Selda, said she feared the composition of the board might revive the trauma suffered by the victims of torture and rape, and  discourage them from coming forward to claim reparations.—With a report from

Appointment of police general to rights claims board questioned