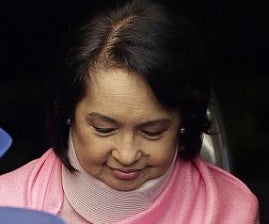 MANILA, Philippines—Saying she is seriously ill and will not evade trial on the plunder charges filed against her, former president and now Pampanga Rep. Gloria Macapagal-Arroyo has pressed the Sandiganabayan anew to allow her to post bail.

The defense counsels said their previous motion for bail pointed out the weakness of the prosecution’s evidence against their client while the supplemental motion cited a new ground in her appeal for bail.

They said Arroyo should be entitled to temporary liberty even assuming the evidence of the prosecution against her was strong.

They cited a 1953 Supreme Court ruling in the case of Montano vs. Ocampo that said bail may be granted even in a capital offense and regardless of a finding that evidence of guilt is strong.—Cynthia D. Balana