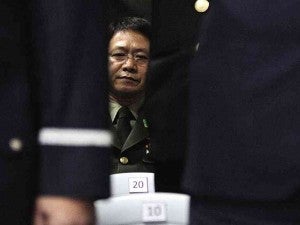 MANILA, Philippines—As he gets his second star, Brig. Gen. Eduardo Año, the military’s intelligence chief, expressed hope that the time will come when the Jonas Burgos case would no longer be appended to his name.

“I hope that time will come. I will be happier if the case would no longer be associated with me,” Año told the Inquirer by phone on Wednesday.

The Senate’s Commission on Appointments has confirmed Año’s promotion to major general as well as his interim appointment as chief of the Intelligence Service of the Armed Forces of the Philippines.

Año reiterated that he was never involved in the disappearance of Burgos nearly seven years ago.

Burgos, an activist-farmer and son of the late press freedom icon Jose Burgos Jr., was believed to have been abducted by soldiers while eating at a fast-food restaurant in a Quezon City mall.

Año noted that the Department of Justice had even denied the motion filed by the lawyers of Burgos’ mother, Edita, to reconsider its dismissal of the arbitrary detention charges against him.

The general said he was willing to assist and cooperate with the authorities’ continued investigation of the Burgos case as part of AFP’s support.

Año said he never had any criminal or administrative case in his entire military career. “The allegations against me have no basis,” he said.

On his recent promotion, Año believed he had the “trust and confidence of the AFP and the national leadership because it is ultimately President Aquino who signs my papers.”

“Never in my life was I involved in any violation of one’s human rights and I am the last person to make another’s life miserable,” Año said.

Of the military officers implicated in the Burgos disappearance, only Army Maj. Harry Baliaga Jr. has been charged in court.