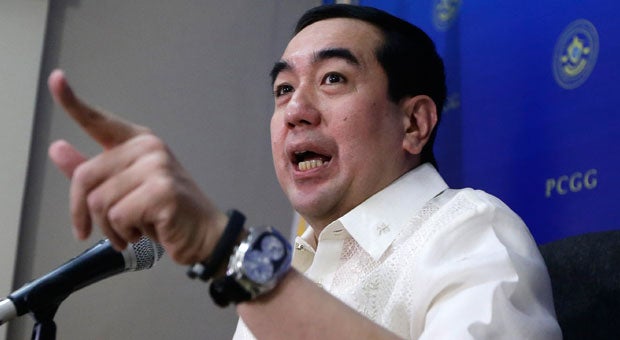 Andres Bautista, head of the Philippine Commission on Good Government, which is tasked to recover the alleged ill-gotten wealth of the late strongman Ferdinand Marcos, speaks in a news conference in Mandaluyong City on Wednesday, Feb. 12, 2014. The Philippine government has recovered the remaining $29 million of the multimillion-dollar Swiss bank deposits stashed away by the late dictator Ferdinand Marcos. AP PHOTO/BULLIT MARQUEZ

The PCGG said it had remitted this month to the treasury $29 million from two accounts in West Landesbank (WestLB) in Singapore, which have been frozen since 2003 due to competing claims from Philippine National Bank (PNB), the martial law class-suit claimants and the so-called Marcos foundations.

The WestLB Singapore accounts were part of the ill-gotten wealth that the late strongman kept in various Swiss bank accounts under dummy foundations. In 1997, the Swiss Federal Supreme Court ordered that these deposits be returned to the Philippine government.

With the $658 million the PCGG recovered in 2004, the money from the WestLB Singapore accounts brings to $687 million the total amount recovered from the Marcos Swiss accounts.

“This is the last from the (Marcos) Swiss accounts,” PCGG Chair Andres Bautista said in a news conference on Wednesday.

Authorities have already recovered more than $4 billion from an estimated $5 billion to $10 billion amassed by the Marcoses during the dictator’s 20-year rule, Bautista said.

He said last month that the government was targeting at least P50 billion ($1.1 billion) more.

Bautista said the government had filed more than 200 civil cases for recovery and forfeiture of ill-gotten assets, including real estate, amounting to about P30 billion to P40 billion ($667 million to $890 million) from the Marcos family, their cronies and associates.

The PCGG is also seeking more than 150 paintings of “prominent masters and artists” collected by the Marcos family that went missing after the Marcoses were forced to flee from the presidential palace during the 1986 Edsa People Power Revolution.

Bautista declined to comment when asked whether he believed that Marcos’ widow, Imelda, and their three children were still living off their hidden wealth.

Imelda is a member of the House of Representatives. Her eldest child, Imee, is governor of Ilocos Norte province, while her son, Ferdinand Jr., is a senator. Her other daughter, Irene, remains low-key and has kept away from politics.

The latest recovery came 28 years after the PCGG was created by then President Corazon Aquino to recover the ill-gotten wealth amassed by Marcos and his cronies during his 20-year dictatorship.

Any recovered ill-gotten wealth was to fund the agrarian reform program.

In a landmark judgment in 1997, the Swiss Federal Supreme Court “ruled that there was little doubt about the criminal provenance of the secret Marcos accounts and securities hidden in Swiss banks,” and ordered that these be returned to the Philippine government.

One of the conditions set by the court was for the Philippine government to compensate martial law victims out of the recovered funds. It has not been met.

As ordered by the court, the funds were placed under escrow with PNB, which reinvested them in various Singaporean banks that had a Standard & Poor’s AA rating.

In excess of legal income

The Philippine Supreme Court ruled in 2003 that the Marcoses’ wealth in excess of their total legal income of around $304,000 from 1965 to 1986 was presumed to be ill-gotten.

Marcos died in exile in Hawaii in 1989 without admitting any wrongdoing during his presidency.

After the high court handed the final ruling forfeiting the secret Marcos deposits in favor of the Philippine government, PNB turned over the next year to the PCGG $658,175,373.60, with the rest of the funds remaining in WestLB Singapore.

The remaining funds in WestLB Singapore were held up after lawyers laid claim to the accounts to satisfy the $2-billion judgment that a US Hawaii District Court awarded in 1994 to martial law victims.

Bautista said the so-called dummy foundations used by Marcos for the Swiss accounts also contested ownership of the WestLB accounts.

“The foundations are still active. They had lawyers who participated in the trial,” he said.

The Singapore High Court ruled in August 2012 that the accounts belonged to PNB as trustee of the Philippine government.

The ruling became final last Dec. 30 after it was upheld by the Singapore Court of Appeal.

“The PCGG wishes to thank PNB for performing its work as escrow agent and facilitating the early remittance of these funds to the national treasury,” Bautista said.

The recovered Swiss deposits are the main source of the P10 billion earmarked for the compensation of human rights victims, which President Aquino signed into law in February last year during the anniversary of the Edsa Revolution against the Marcos dictatorship.

A year later, the President still has not appointed the members of the human rights compensation board.

“We’ve remitted more than enough to fulfill the P10-billion requirement. We checked with the BOT (Bureau of Treasury). There’s P10 billion that has been allocated,” Bautista said.

How the money will be spent is up to the government, he said.

The PCGG has also gone after former PCGG Chair Camilo Sabio and other officials for misusing the portion of the recovered Swiss accounts that was set aside as a “contingency/litigation fund.”

The PCGG in 2003 ordered PNB to retain 5 percent or about $30 million of the recovered Swiss accounts as a “contingency/litigation fund” for the recovery of about $60 million in Marcos ill-gotten wealth in the so-called Arelma account in New York and in WestLB.

In its first year in office, the Bautista-led PCGG administration reported that it had withdrawn $10 million from the fund retained with PNB and turned this over to the treasury in June 2012 for agrarian reform expenses.

The new PCGG administration found that “excessive travels and expenses” were charged to the contingency fund during Sabio’s term.

The PCGG also reported that it had renegotiated the trust agreement with the privatized PNB because the income from the amounts retained by PNB “was less than competitive despite the above-the-market trust fee rate that was being charged against the fund.”—With a report from AP