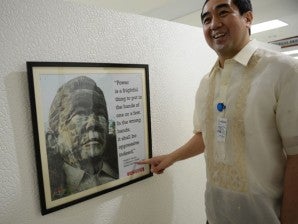 MANILA, Philippines — The Presidential Commission on Good Government  turned over P247 million to the treasury this week from the sale of an allegedly ill-gotten Marcos property that was surrendered to the government nearly 30 years ago.

PCGG Chairman Andres Bautista said they remitted on Monday the P247.11 million paid by the winning bidder, Ciriaco Realty, for a 4,038-sq.m. commercial and residential lot on Roxas Boulevard in Parañaque City.

The so-called Mapalad property was among the alleged illegally amassed assets of the late dictator Ferdinand Marcos which were surrendered to the first Aquino administration through the PCGG by the late former Marcos associate Jose Y. Campos in 1986.

Ciriaco Realty submitted the highest offer during the second round of public bidding last March, the PCGG said.

The bid surpassed the adjusted P216 million minimum price after the first round of bidding last year because the submitted bids were lower than the original floor price of P250.7 million set by the Privatization Council.

Under the presidential order that created the PCGG in 1986, all proceeds from recovered ill-gotten assets of the Marcoses and their cronies are to be used for the agrarian reform program.

With the conclusion of the Mapalad property sale, Bautista said,  the PCGG has already remitted to the Bureau of Treasury P284.4 million so far this year.

The PCGG targets to remit P450 million this year.

This does not include the P70.2 billion that the PCGG remitted in October last year after recovering 24 per cent of preferred shares, other dividends and accrued interest in San Miguel Corp. which the government claimed to be part of the coco levy funds.

“This constitutes the largest single recovery of the Commission to date,” the PCGG reported.

Under Bautista’s term, the PCGG has privatized four sequestered properties, including the Mapalad property, for a total of P477 million.

The 2,012-sq. m. Wack-Wack property was sold in 2011 for P127 million, which was 25 per cent above the floor price set by the PCGG and the Privatization Council.

Bautista said they are rebidding the 1.7-hectare J. Y. Campos Compound in Baguio City that is estimated to be worth at least P133 million.

He said only one company participated in the first public bidding.