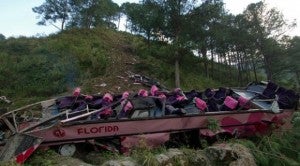 A hearse was parked outside the hospital, waiting to drive Jimenez’s body back to his relatives in Metro Manila.

The comedian’s brother-in-law, Victor Ramoso, and friends represented by Kate Lim, arrived here to claim the remains of the comedian, who was one of the 14 people killed when the passenger bus they were riding in fell into a ravine in Barangay Talubin here on Friday.

All the fatalities were laid out in cots at the hospital chapel, covered with white blankets. Later Saturday, they were placed in separate coffins, except for the remains of Marcial Baranda Jr., Jimenez’s friend, which were placed in a body bag to accompany Jimenez’s casket in the hearse.

The hearse left Bontoc shortly after 2 p.m. for the 345-kilometer journey to the national capital.

Senior Supt. Oliver Enmodias, Mt. Province police director, said the police had no idea what condition Jimenez’s body was in when it was recovered from the wreckage. Enmodias had described him as a “man with long hair.”

Aside from Baranda, Jimenez had several other friends traveling with him on the G.V. Florida Transport bus that crashed into a rice field at the bottom of a ravine in Talubin at 7:20 a.m. on Friday.

Jimenez and eight other passengers died instantly. The bodies of some of the fatalities were mangled or torn, police and rescue workers said.

A television crew from the Solar News Network also showed up in Bontoc to fetch the remains of their creative director, Giovanni “Bam” Morillo, who was with the Jimenez group.

Police here said eight of the 32 survivors were treated at the Luis Hora Memorial Regional Hospital in Bauko town, while 24 were taken to the Bontoc General Hospital, including 32-year-old Annenmik Verwegen, a Dutch national.

On Saturday, a group of foreigners visited Verwegen at the hospital as she waited to be airlifted to Baguio City. The foreigners declined to talk to the Inquirer.

Police said eight of the survivors who were taken to the two Mt. Province hospitals were airlifted by military helicopter to hospitals in Baguio City on Friday.

The 7-year-old boy who survived the crash, Agong Sicam, was flown to a Manila hospital with another survivor, Abegail Sicam, a musician. Another fatality, Andrew David Sicam, was also a musician.

Some of the survivors said they were asleep when the bus met the accident, 12 hours after it had left from Sampaloc, Manila.

Carina Codiamat, 27, Barangay Can-eo here, said: “I was awakened when the bus crashed. I remember feeling the rush of air as the bus plunged down, then I was rolling around.”

Codiamat was thrown from the bus, rescuers said. “When I regained consciousness, I heard children crying,” she said.

Bernhardt Beshtold, a Quezon City resident who also lives in Austria, described the accident as “surreal.”

“It was very fast, very intense. [It happened] in a flash that we couldn’t react on time… It seemed very unreal,” said Beshtold, who suffered cuts and bruises on his face.

Olivia Aglipay, 29, of Barangay Bangnen in Bontoc, was awake when the bus crashed.

Aglipay could not speak because of injuries to her face. But she indicated through gestures to her cousin, Viola Loma-ang, that the bus driver lost control of the bus, possibly because the brakes failed.

Loma-ang, interpreting Aglipay’s gestures, said one of the passengers noticed that the bus had lost its brakes and had panicked just before the vehicle fell into the ravine.

Enmodias said investigators concluded the accident was due to “mechanical failure and human error.” He said criminal charges were being prepared against the owners of Florida.

Celina Claver, the Cordillera regional director of the Department of Transportation and Communications, said the Florida fleet serving the Manila-Bontoc and Sagada-Manila route used to be operated by a Bontoc-based tour bus company. With reports from Richard Balonglong, Kimberlie Quitasol, Desiree Caluza and Vincent Cabreza, Inquirer Northern Luzon