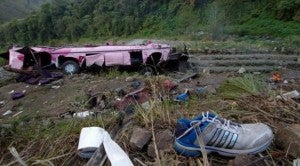 Two bus companies, including the operator of the bus that fell into a ravine in Mt. Province last Tuesday, killing 14 people including comedian Arvin “Tado” Jimenez, have been suspended by the Land Transportation Franchising and Regulatory Board (LTFRB).

The move was considered the single largest suspension order by the LTFRB and is seen as part of broader efforts to increase the scrutiny of operators that may be in violation of safety regulations.

A lawmaker, on the other hand, wants to look into how the LTFRB has been overseeing the operations of bus companies, particularly their management and labor conditions, following the spate of recent deadly road accidents.

Anakpawis party-list Rep. Fernando Hicap on Saturday called on the House committee on transportation to act on his resolution which seeks to remove “rolling coffins” or unsafe public buses from the roads. Hicap said he filed his resolution on Jan. 28, even before the latest accident on the outskirts of Bontoc that also injured 31 passengers.

A Department of Transportation and Communications report showed that while the bus had a G.V. Florida body marking, its plate number was assigned to another bus company, the Mt. Province Cable Tours owned by Norberto Que Sr.

Officials of both companies could not be immediately reached for comment.

“There are enough merits to immediately recall the whole fleet of G.V. Florida and Mt. Province Cable Tours, and temporary suspend their operations until we verify the permits of their respective units,” LTFRB Chair Winston Ginez said in the statement.

The accident happened at around 7 a.m. on Feb. 4, when the Florida bus fell down a ravine in Talubin, Bontoc.

The LTFRB report noted the chassis and engine numbers of the Florida bus had been tampered with and were not registered with the Land Transportation Office. The bus was not authorized to operate as a for-hire vehicle.