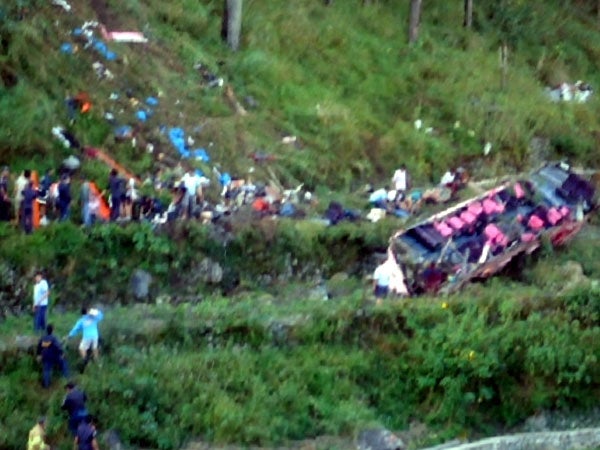 FALLEN TRUCK. A passenger bus bound for Bontoc, the capital town of Mt. Province, fell into a 500 meter deep ravine at 7:20 a.m., killing 14 people, among them a dutch woman and a Canadian man. Police said the bus crashed onto a rice field, killing 9 people at the impact site. The rest of the fatalities died while receiving treatment at a local hospital. PHOTOS CONTRIBUTED BY THE BONTOC POLICE OFFICE

n and a Canadian man, were killed when a bus fell into a 500-meter-deep ravine on the outskirts of Bontoc, capital of Mountain Province, Friday morning, police said.

Ann Van de Ven, a tourist from The Netherlands, and Canadian Alex Loring were found dead at the crash site.

The two foreigners were among the nine people who were killed instantly when the bus fell into the ravine in Sitio Pagang at 7:20 a.m., said Senior Supt. Oliver Enmodias, Mountain Province police director. 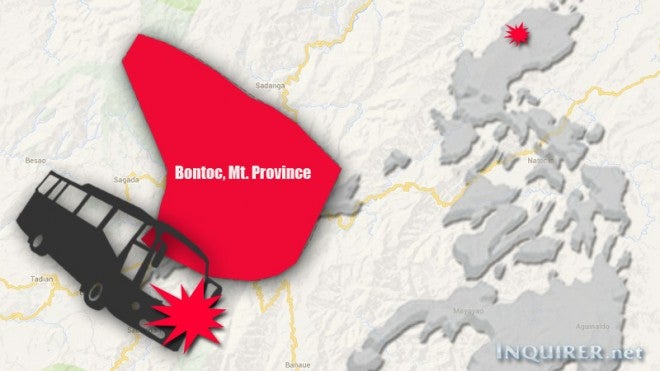 Enmodias said another Dutch, Annenmik Veerwege, was among the 31 injured, including a 7-year-old child identified as Agung Sikam.  They were being treated at the Bontoc General Hospital.

Enmodias said the Florida Trans bus, which came from Sampaloc in Manila, was carrying 45 passengers.

Police also identified some of the survivors as Michal Negrito, Camille Osorio, and Abegail Sicam.

Authorities were still determining the exact number of people on the bus as they searched for more victims.

Six other fatalities remained unidentified as of 3:30 p.m.

With a report from Vincent Cabreza, Inquirer Northern Luzon,