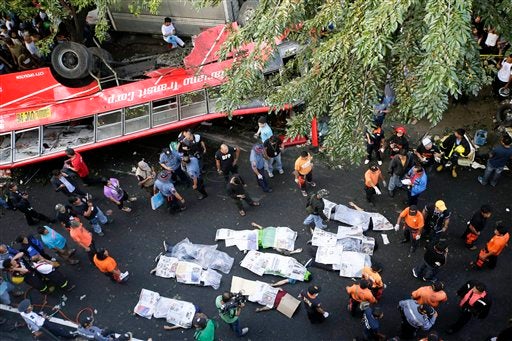 Bodies of passengers are covered in newspapers as they are laid down on the road after a passenger bus plunged from an elevated highway known as Skyway Monday, Dec. 16, 2013, in suburban Paranaque southeast of Manila, Philippines. Officials said at least 21 people died, mostly passengers, and more than 20 others were injured in the accident. (AP Photo/Bullit Marquez)

MANILA, Philippines—Eighteen people were confirmed killed and over a dozen others were injured when a Don Mariano passenger bus fell off from the elevated Skyway and landed onto a passing van on the West Service Road in Parañaque City early Monday, police said.

Earlier, it was reported that the fatalities have reached 22, but the police said the official count is 18.

The report said more than 10 bodies have been recovered from the Don Mariano Transit bus which was plying the elevated Skyway on its way to Pacita, Laguna, when it fell off the expressway around 5:15 a.m. on Monday. Another body was pulled out of a van that was crushed by the bus after the tragic fall.

Police Chief Inspector Juanito Guinid Jr., Skyway Team Leader, said bodies of the 17 victims have been taken to the Amigos Funeral Parlor, while the other remains at morgue of the Paranaque Doctors Hospital.

He said 16 others were injured from the accident.

Police Superintendent Elizabeth Velasquez said the bus veered off the highway and crashed onto a van passing below in suburban Parañaque city at dawn Monday.

Television footage showed a number of bodies strewn around the bus wreckage with police officers milling around. The van was an unrecognizable pile of smashed white metal.

Ivy Vidal, spokeswoman of the corporation running the Skyway, said it was not clear what caused the accident but added that it was wet due to rain.

Land Transportation Franchising and Regulatory Board Chairman Winston Ginez said they would issue a preventive suspension order on all the 78 units of the Don Mariano Transit.

Ginez said they had already talked to Dra. Melissa Lim, owner of Don Mariano Transit, who said they had recalled their buses for inspection by the LTFRB.

Meanwhile, heavy traffic in was reported as a result of the accident.