Ruby Tuason: I have to do this | Inquirer News

Ruby Tuason: I have to do this 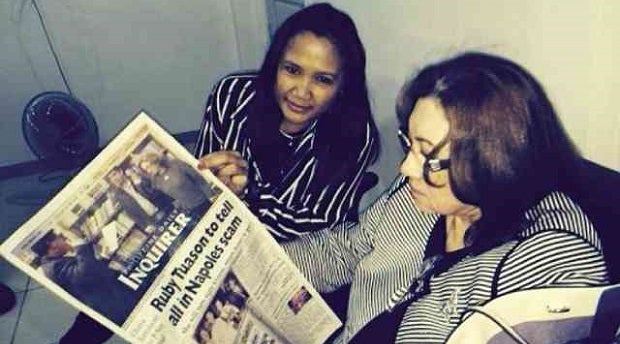 INQUIRER AT THE SCENE Ruby Tuason reads the Friday issue of the Inquirer upon her arrival from the United States to turn state witness. With her is Inquirer reporter Nancy Carvajal. CONTRIBUTED PHOTO

SAN FRANCISCO, California—Her deep love for her grandchildren and a desire to right a wrong drove socialite Ruby Chan Tuason to turn her back on her “close” friends and testify that they received millions of pesos in kickbacks from businesswoman Janet Lim-Napoles, the alleged mastermind behind the P10-billion pork barrel scam.

Tuason was interviewed by the Inquirer in a café at the San Francisco International Airport on Wednesday night less than two hours before she boarded a Philippine Airlines flight to Manila where she reaffirmed her sworn statement before Ombudsman Conchita Carpio Morales.

Earlier, Tuason swore to the veracity of her testimony in an affidavit before Consul General Jaime Ramon Ascalon at the Philippine Consulate in San Francisco.

Dressed in a long black dress, Tuason looked calm as she talked to the Inquirer about her decision to come forward and testify that she worked for Napoles as bagman for the kickbacks of Senators Juan Ponce Enrile and Jinggoy Estrada from projects funded with their allotments from the Priority Development Assistance Fund (PDAF).

She was accompanied by her lawyers, Benedicto Valerio and Dennis Manalo, who were present during the interview with the Inquirer.

Meñez, who had custody of the new witness in the pork barrel scam case, gave the Inquirer 30 minutes to interview Tuason after she agreed to it with her lawyers’ approval.

Tuason said that among the reasons she decided to testify against Estrada and Enrile’s former chief of staff, Jessica Lucila “Gigi” Reyes, whom she described as her close friends, was the pain that her wrongdoings had caused her family, particularly her young grandchildren.

“I do not want them to hate me when they grow up, because they would be told by friends that their grandmother did something very wrong,” Tuason said.

By coming forward as a state witness, she could save her grandchildren from ridicule and criticism, she said.

“I do not want to be an embarrassment to my grandchildren and children. I am so ashamed of myself that I have to do something to correct what I have done,” Tuason said.

Tuason said that the only way to stop the cycle of lies was for her to come forward and tell the truth that she delivered millions of pesos in kickbacks to Estrada himself and to Enrile through Reyes from Napoles.

“I have to do something, this has to stop. I cannot right a wrong with another wrong if I lie for them,” Tuason said.

Tuason said she delivered Estrada’s kickbacks to his office in the Senate, with the money placed in bags. She said the size of the bags depended on the amount of the money.

She said Reyes received the kickbacks for Enrile in restaurants and in her house.

Tuason described Estrada and Reyes as close friends, going all the way back to the administration of Estrada’s father, former President Joseph Estrada whom she served as social secretary.

The former president said Tuason was only on the staff of the social secretary, in charge of catering.

She said that after she was named as one of those involved in the pork barrel scam last year, she left the country and that gave her time to reflect on what she had done.

“I was alone and it gave me a chance to dig into my conscience. I was so ashamed to myself and I said I could not continue like this. I made a mistake and I had to tell the truth,” she said.

But it pained her that she would be testifying against Estrada and Reyes, she said.

Was she also close to Napoles?

“I cannot really say that we were good friends like the others (Estrada and Reyes –Ed.),” Tuason replied.

Benhur Luy, the principal whistle-blower in the pork barrel scam, said in an earlier interview with the Inquirer that Napoles set Tuason aside and dealt directly with Estrada and Reyes after Tuason introduced them to her.

Tuason said Napoles began to use dummy nongovernment organizations as recipients of the PDAF allotments of Estrada and Enrile in 2004.

Tuason admitted that she was cut off from the transactions after Napoles had become acquainted with Reyes and Estrada.

Tuason said she never knew that Napoles’ projects were nonexistent and that nothing had been delivered to farmers.

“I did not know that they were ghost projects. I only found out when the story came out in the newspaper,” she said, referring to the series of reports on the pork barrel scam in the Inquirer.

She said Napoles assured her that all the projects were aboveboard.

“I believed Jenny (nickname of Janet Napoles –Ed.) when she assured me that the reason for the hefty commission for legislators was that she had an oversupply of merchandise,” Tuason said.

She said it was like the promotional sales at American stores where the goods are offered at 50-percent discount when sales have topped the expected margin of profit.

The Inquirer had known about Tuason’s application to serve as state witness for sometime, but held off the story for her and her family’s security.

(On Monday: Serving as bagman for Napoles a misjudgment; feeling guiltier every day; sense of guilt worsened by devastation from Supertyphoon “Yolanda”)