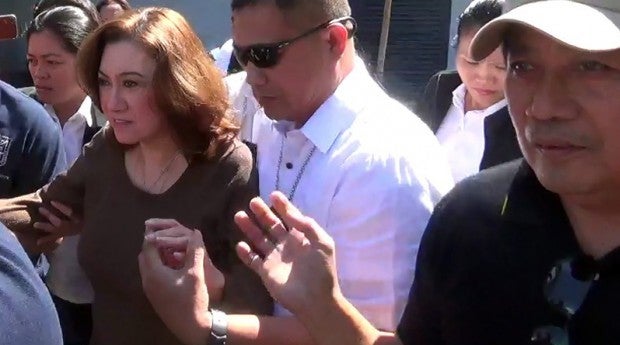 Kickbacks for legislators that alleged scam mastermind Janet Lim-Napoles skimmed off pork-funded projects were brought to the Senate placed in bags, the size of which depended on the amounts, or were picked up in restaurants by their intended recipients, according to erstwhile scam suspect Ruby Chan Tuason in the affidavit she submitted to the Office of the Ombudsman on Friday.

Tuason said she acted as a conduit since 2004 for the kickbacks of Senators Juan Ponce Enrile and Jinggoy Estrada derived from the senators’ own pork barrel, or Priority Development Assistance Fund (PDAF), entitlements through a scheme allegedly developed by Napoles using dummy nongovernment organizations (NGOs).

She said she personally handed the money for Estrada to the senator himself, and for Enrile to the latter’s former chief of staff, Gigi Reyes.

Tuason also confirmed  the statements of Benhur Luy, the former Napoles aide who is now the principal scam whistle-blower, that Enrile and Estrada received a 40-percent commission—minus 5-percent “withholding tax” for Napoles—for every project funded by their pork that they assigned to Napoles’ dummy NGOs.

She also said that she delivered to the two senators from Napoles were more than the amounts that Luy earlier quoted in his affidavits and Senate testimony.

“I could not recall anymore the exact amount, but I am certain that they (Estrada’s kickbacks) were more than the mentioned data of Luy,” Tuason said.

She also said she “personally delivered” to Reyes more than the amount that Luy said was Enrile’s commission.

Tuason also corroborated the whistle-blowers’ earlier statements that Napoles advanced a portion of the lawmakers’ commission following the lawmakers’ accomplishing the required request to the Department of Budget and Management to release the pork funds for their proposed project or projects, the special allotment release order.

She also admitted to having received a commission from Napoles for every project she transacted involving the PDAF of the two senators.

Tuason said that she stopped being the two senators’ conduit of the money from Napoles for Estrada in 2008 and Enrile in 2007.

How deliveries were made

In her affidavit, Tuason related in detail exactly how she made the deliveries of the kickbacks to Estrada and Reyes.

“I personally delivered all the shares of Sen. Jinggoy Estrada and when I delivered in his office at the Senate I was instructed to pass through the entrance to the senator’s parking space so that my bag containing the money will not be opened,” Tuason said.

“I usually placed the money that would be delivered to Estrada in a bag, the size of which depends on the amount,” Tuason added.

Apart from the cash deliveries to Estrada’s office in the Senate, Tuason said she also gave him his commissions from Napoles in Greenhills, San Juan. (She did not specify the exact address in Greenhills.)

She said she personally handed the cash intended for Enrile to his chief of staff, Reyes, in various places.

“I personally gave it to Atty. Gigi Reyes who picked it up personally in my house or in restaurants where we both agreed to meet,” she said.

Reyes would pick up the money alone in the restaurant but that Enrile would sometimes join them, Tuason said.

“I remember occasions that Enrile would join us when we were almost done for a cup of coffee, and sometimes he would just come to pick up Gigi,” Tuason said.

Among the restaurants she mentioned were Tsukiji, Mamou, Gourmand and L’Opera. She did not specify where these restaurants were located.

She said the use of Napoles’ dummy NGOs as recipients for the PDAF allotments of Estrada and Enrile began in 2004.

“At first Reyes refused to see Napoles but agreed to course the release of Enrile’s PDAF following the same arrangement that Napoles made with Estrada,” Tuason said.

She explained that she was cut off from the transactions after Reyes and Estrada became personally known to Napoles.

“Estrada appeared to have directly dealt with Napoles because money intended for delivery to him was received by his secretary and no longer by me,” Tuason said.

She also confirmed that she knew some of the whistle-blowers like Luy and Marina Sula.

Tuason also revealed that Napoles sought Reyes’ help when she was subpoenaed in the Senate hearing on the fertilizer fund scam.

“While the Senate hearing on the fertilizer fund scam was ongoing, Napoles feared that she would be called to testify. So she asked me to introduce her to Reyes so she could give her side of her involvement. After my introduction they became close friends,” she said.

Tuason said she came to know Napoles in 2004 through her late husband, Carlos “Butch” Tuason—a cousin of Mike Arroyo, the husband of former President Gloria Macapagal-Arroyo, now a Pampanga congreswoman—as a potential buyer of their house in Bel-Air, Makati.

In her subsequent meetings with Napoles who introduced herself as businesswoman who was also involved in government contracts, Napoles asked that she be introduced to Estrada and other politicians.

She said she became close to Napoles when the latter’s mother died in 2008 and Tuason helped her in making the arrangements for the wake and other parties that the businesswoman gave.

She said that she was a frequent visitor at Napoles’ condominuim at Pacific Towers in Taguig and attended many masses at Napoles’ Forbes Park house and Discovery Center office.

Tuason denied that she was an employee of any lawmaker, but confirmed she was the social secretary of deposed President Joseph Estrada, who is now mayor of Manila.

Tuason, who had applied as a state witness in the P10-billion pork barrel scam case, has been placed under provisional coverage of the government’s Witness Protection Program (WPP).

Tuason, who fled to the United States at the height of the pork scandal last August, returned to the country on Friday, escorted by WPP director Martin Meñez, Rolando Argabioso, the special task force chief of the National Bureau of Investigation, and Dan Daganzo, the NBI Interpol head.