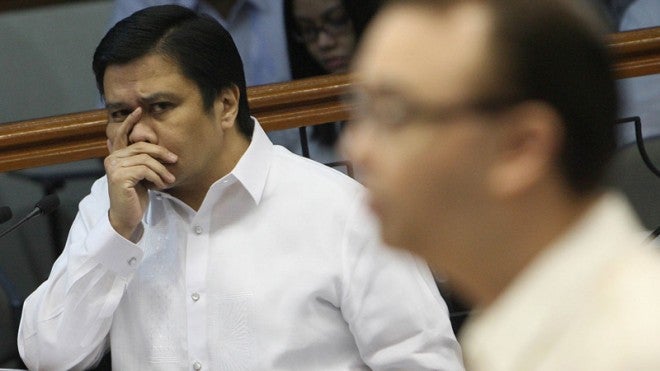 MANILA, Philippines — Senator Jose “Jinggoy” Estrada said he has received information that his co-accused in the plunder case over the “pork barrel” scam, Ruby Tuason, would pin him down.

Estrada made the statement as he disclosed that Tuason had asked him for money but that he turned it down.

Tuason arrived from the United States this Friday to tell all on the “pork” scam.

(I received news that Ms. Tuason will arrive in the country and execute an affidavit against me in connection with the ongoing PDAF scandal. That’s what I heard)

(If it’s true that Ms. Tuason will execute an affidavit, I can only assume that maybe the pressure on her is too heavy that she could no longer take it that’s why she gave up. Or maybe she is just being pressured and she was just forced to do it.)

Estrada could not think of other reasons why Tuason, the former social secretary of his father, former President and now incumbent Manila Mayor Joseph Estrada, would testify against him.

He also described Tuason as a family friend who was always at his father’s house every Sunday.

(That’s why I’m wondering, I am really surprised that she would suddenly execute an affidavit against me. We never had any disagreement)

The senator though recalled that when Tuason left the country after her name was dragged into the pork scam, he called her to ask how she was.

Despite this,Estrada said he was unfazed by whatever testimony Tuason would say against him.

In the first place, he said, Tuason had never been part of his staff in the Senate.

He said Tuason was never connected in his office, officially or unofficially.

Estrada said he had not also authorized Tuason to represent him “in any capacity or whatsoever.”

Lastly, the senator said, Tuason had no role in the PDAF allocation of his office.

But when asked if he knew any connection between Tuason and Napoles, Estrada said: ” Hindi ko alam pero alam ko dati magkaibigan sila. (I don’t know but I know they used to be friends)”

Asked if he or his father had any plan to talk to Tuason, the senator said: “Hindi na. What for?”