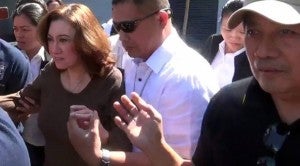 Tuason is one of the respondents in the P10-billion scam involving the Priority Development Assistance Fund allegedly engineered by businesswoman Janet Lim-Napoles.

The whistle-blowers named Tuason Napoles’ conduit to Senators Juan Ponce Enrile and Jinggoy Estrada. According to the record of principal whistle-blower Benhur Luy, Tuason received P60 million from Napoles’ JLN Corp., although it was not clear whether she received it for Enrile or Estrada.

Aside from Enrile and Estrada, Sen. Ramon Revilla Jr. was also charged with plunder in the pork barrel scam.

In separate affidavits, the whistle-blowers tagged Tuason a close friend of Napoles and a regular visitor in her many homes. In her affidavit, whistle-blower Marina Sula said: “I often see [Tuason] in our office at JLN Corp. at the Discovery Center. She also attends the events of Madam Janet Napoles. There were a few times that I saw her receiving cash from Napoles. One time, I was asked by Madam Napoles to bring money to [Tuason’s] house and she herself received the money.”

According to Nova Kay Macalintal, another whistle-blower, Tuason was also a regular visitor at Napoles’ North Pacific Plaza condominium in Bonifacio Global City.  “I know Ruby Tuason because she always goes there. One time, I saw Ate Jenny (Napoles) handing her money before leaving. Sometimes, I escort her to the lobby of the condominium.”

Luy’s mother, Gertrudes, said she knew Tuason as a close friend of Napoles. “I didn’t know if she was a [government] official or what her job was,” she said.

Tuason is also among those charged with plunder over the alleged misuse of P900 million from the Malampaya Fund. She allegedly received P242 million in kickbacks from the fund. During the filing of the plunder case in October last year, Justice Secretary Leila de Lima said the investigation against Tuason’s principal in the Malampaya Fund scam was almost done. She also hinted that the principal was a relative of Tuason.

Tuason is known to be a core member of Masa Ang Riwasa ni Erap, a group of women who played a decisive role in former President Joseph Estrada’s presidential campaign and are closely attached to former First Lady Dr. Loi Ejercito Estrada.

A few weeks after President Estrada was sworn to office, Tuason was appointed Estrada’s social secretary with the rank of presidential assistant. An astute marketing strategist and a seasoned public relations practitioner, her appointment came a week after the installation of her husband, Carlos “Butch” Tuason, as chair of the Philippine Sports Commission.

She also played a key role in the financial logistics of former President Gloria Macapagal-Arroyo’s administration’s Team Unity senatorial slate in the 2007 elections.

Arroyo’s lawyer and spokesperson, Ferdinand Topacio, has said the former first gentleman had no dealings with Tuason.  Inquirer Research