Tacloban rising from the rubble 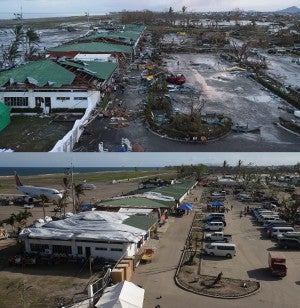 The Tacloban airport on Saturday, Nov. 9, 2013, top, a day after Typhoon Haiyan struck, and on Monday, Dec. 9, 2013, one month after. Energy Secretary Jericho Petilla said Tacloban City might have power services restored by Dec. 24 while other parts of Leyte as well as Eastern Samar might have to wait longer for transmission and distribution facilities to get back online. AP PHOTO/AARON FAVILA

TACLOBAN CITY, Philippines—Gina Amador-Magdusa thought she had seen the last of Dante’s “Inferno”—a dredging vessel tossed from the port of Tacloban City to a coastal shantytown during the assault of Supertyphoon “Yolanda” three months ago today.

For 32 days, the rusting hulk sheltered the 34-year-old housewife, her husband and four children, along with some 190 others from 35 families whose homes the ship had demolished when it raked Barangay 75.

Around 30 people perished in the neighborhood, a fraction of the more than 6,200 people killed by the most powerful cyclone to hit land and the tsunami-like storm surges it generated.

Putrefying corpses littered the city for weeks and over a dozen of them remained uncollected around the vessel that had settled on a sea of debris.

Magdusa recoiled when she talked about the stench of decaying flesh, along with petrol fumes, that permeated the air inside the dredger, the sweltering heat and the mosquitoes that feasted on them at night.

That was until humanitarian workers, fearing a fire from the two common cooking stoves used inside the shelter, evacuated the occupants and gave them tents.

On a sultry December day, they piled out of the rusting wreck, lugging their few possessions: two dogs, two broken guitars patched up with masking tape and two half-filled bottles of bourbon.

The debris had been swept clean at the barangay, as it was in most places in this city of 220,000—thanks mainly to the efforts of the Taiwan-based Tzu Chi (Compassionate Relief) Foundation and the United Nations Development Programme.

The foul odor has vanished, but the Department of Public Works and Highways (DPWH), mercifully, failed to get rid of the ship. Mercifully, because three storms had since followed Yolanda. With no place to run to, Magdusa and other former boat occupants took refuge in the vessel each time—a sorry situation that the British charity Oxfam described as a “disaster on top of an already catastrophic disaster.”

“We were afraid the sea would rise again and the powerful wind would come,” said the woman, who was washing clothes on Wednesday outside the shanty her husband had built just spitting distance from the Japanese-made dredger.

It is a recurrent fear in the squatter colonies at the edge of the sparkling blue Leyte Gulf, particularly in hard-hit Barangays 88, 89 and 90 populated mostly by laborers and fishermen, the poorest among poor Filipinos. The area—once a workingman’s beach paradise of karaoke bars, beer gardens and barbecue pits—was leveled by the typhoon.

But since the United Nations High Commissioner for Refugees (UNHCR) handed out thousands of tents in early December, the place has become a veritable refugee camp—the kind installed for people who had fled civil strife in their homelands. Except that here, sari-sari stores abound, set up by beneficiaries of Tzu Chi, the largest humanitarian organization in the Chinese-speaking world, which doled out up to P15,000 per family, a fortune in this region, one of the poorest in the Philippines.

Alongside the tents are huts made of scavenged materials. Some have shiny new roofs of GI sheets, either handed out by international nongovernment organizations (NGOs) or bought from earnings in cash-for-work programs of the Taiwan charity group and other private agencies.

Tacloban was down and out when Tzu Chi mobilized battalions of typhoon victims to clean up the massive detritus of Yolanda—twisted iron and steel, toppled trees and power posts, crushed concrete, splintered wood and spaghetti tangles of electric cables. The workers were given P500 a day, twice the daily minimum wage. It energized the people. Other groups had since launched similar programs.

The UNHCR initiative gave momentum to the single-handed Tzu Chi efforts, while other groups concentrated on helping the strapped Department of Social Welfare and Development meet the more urgent survival needs for food and water.

There are many more boats here now after the Bureau of Fisheries and Aquatic Resources recently began distributing wood to patch up damaged fishing outriggers with intact backbones.

Children, traumatized by the cyclone’s ferocious 315-kilometer-per-hour wind and sea waves as tall coconut trees, have begun to play along the shore.

Otherwise, there is little recovery activity in what was once the economic hub in Western Visayas.  Tacloban remains largely a sullen, desolate city, where most neighborhoods remain without electricity at night.

The peripatetic Maranao from Marawi City have converged in the city, setting up stalls in front of the still-shuttered shops whose owners, distressed by the widespread looting that followed the storm, had fled to either Cebu or Manila. By nightfall, streets in the shopping center are deserted.

4 million of them homeless—their houses either totally or partially destroyed—is winding down.

Talk is rife about the government’s recovery and rehabilitation phase—the rebuilding of damaged infrastructure and the construction of permanent houses to be coordinated by former Sen. Panfilo Lacson, who was appointed presidential assistant for the effort on Dec. 10.

The buzzword is “build back better” in this era of climate change and the anticipated more violent and frequent storms ahead, two dozen of which bedevil the country annually.

But three months on, about the only visible sign of government activity on the shelter front are the bunkhouses, described as interim accommodations. Simply put, it is another stage that some typhoon victims have to go through before moving to permanent homes once issues about housing are threshed out, among them legislation on the no-build zone 40 meters from the coast at high tide, the identification of relocation sites, and land-titling.

At least 220 bunkhouses in a dozen typhoon-ravaged towns had been planned for completion before Christmas last year. They remained mostly unoccupied after UN-led groups pointed out—and the government agreed— that many of them did not comply with international standards and were too cramped for the average family of six or seven.

Lacson said the Geneva-based International Organization for Migration had repaired some of the bunkhouses at a cost of P10,000 each.

The former chief of the Philippine National Police had agreed with Public Works Secretary Rogelio Singson that the bunkhouses worth around P900,000— each with 24 rooms, eight toilets and a common kitchen— were not overpriced but “under specs.”

In the town of Marabut in Western Samar province, Mayor Percival Ortillo Jr. said private contractors showed up one day and, without consultation, began building the 16 bunkhouses. Last week, after completing the project, the contractors abruptly left, but not before asking the mayor to sign a document saying they were turning over the bunkhouses according to specifications and free of defects. Ortillo said he signed the document only after that paragraph was deleted, although there really was no more pressing need for them because people had done makeshift repairs on their homes using plastic sheets donated by NGOs.

When the scandal broke out, Singson insisted there was no overpricing because the contractors would not be paid unless the project complied with DPWH norms.

Lacson nevertheless flagged the hint of corruption and warned that he would take stern measures against anyone who would take advantage of the billions of pesos meant for the recovery program.

The head of the rehabilitation in Aceh province, Indonesia, following the massive earthquake and tsunami that killed more than 200,000 people along the rim of the Indian Ocean in December 2004, had insisted on an anticorruption mechanism before embarking on his mission that was widely viewed as a success story.

There were more houses destroyed in the Philippines than in Indonesia, which accounted for 130,000 of the overall death toll from the 2004 tsunami.

The United Nations, responding to heartrending accounts of the devastation in the Philippines and the resilience of the survivors, has appealed for $791 million to support the Aquino administration’s recovery program.

The immediate provision of houses is key to stability among the storm victims, thousands of whom are still in evacuation centers.

One relocation site is shaping up in a 70-hectare spread in Barangay Kawayan located at least 25 kilometers and three bus rides away from the fisherfolk’s coastal shantytowns.

A billboard at the entrance to the village says that the National Housing Authority (NHA), under the Office of the President, had embarked on a P19-million land development project there that commenced on Aug. 9, 2013, and is due for completion this coming Valentine’s Day. There was no evidence it had even gotten off the ground.

Nearby is Barangay Suhi where more than 2,000 corpses in body bags had remained unburied until a news reporter stumbled on them, and Lacson scrambled to get officials cracking to get them interred posthaste in a mass grave. It was the first major achievement of the rehabilitation czar.

There, GMA’s Kapuso Foundation, in partnership with the NHA, is building 400 housing units within 340 calendar days, according to a poster at the site provided by the Tacloban City government.

But at the rate the ground leveling is going on, it would take at least two months to complete at least 20 houses, said Mario Pacuri, one of the four contractors of the project that began on Jan. 13. There were one backhoe and one bulldozer at the site on Wednesday.

Each beneficiary would get a house 5 meters by 6 meters in size and a toilet measuring 1.2 by 1.8 meters in what the TV network describes as the “Kapuso Village.”

City officials have called meetings with barangay chiefs to announce the government’s relocation plans and they, in turn, have spread the word to potential beneficiaries, most of them engaged in fishing. Many of them are aware that if plans called for them to remain at the site and commute to their fishing grounds, they would be set back P50 pesos in transportation cost before they even cast their nets.  On bad days, there’s not even a single fish catch, they said.

“All of them have agreed to relocate there,” said Estelita Daaco, 58, the chair of the Barangay 75 council, with a straight face.

Magdusa, the survivor of Yolanda and Dante’s “Inferno,” wants to have a house away from the sea eventually, but it is not in the cards right now. Her husband works as a temporary helper at the nearby Coca-Cola plant and gets paid P250 a day, a fortune in an area where few jobs are available, inflation is up 40 percent and people survive on food rations, mainly from international charity groups.

“If it is going to be safe there, why not?” she said. “So far, everything is up in the air. There’s nothing certain about what we had been told.”

One thing is certain, however.  With the fierce network wars raging in Metro Manila and elsewhere, ABS-CBN is bound to follow GMA’s rebuilding efforts.  The rehabilitation work here just might become the competing networks’ latest horse race.

Signs of recovery appear a month after ‘Yolanda’