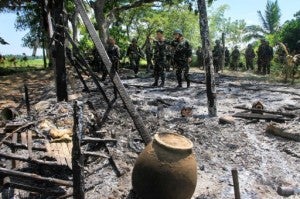 MANILA, Philippines – Malacañang on Tuesday said government troops are ready to fulfill their duty to protect Filipinos from attacks by the Bangsamoro Islamic Freedom Fighters (BIFF).

Coloma said the Philippine National Police (PNP) and Armed Forces of the Philippines (AFP) are prepared to ensure the people’s safety as part of fulfilling their duty.

“At all times, the government has a sworn duty to ensure the safety of Filipinos, whether in the rural or urban areas” he said in a press briefing.
The PNP, AFP and intelligence community will keep track on the movements of the state’s enemies, he said.

He added that troops cannot afford to get complacent as the government will not tolerate any threats to national and local security and the lives and safety of the people.

Coloma on Monday said the government is working to prevent the BIFF from becoming a major threat in the future.

AFP operations vs BIFF in Maguindanao extended until Saturday