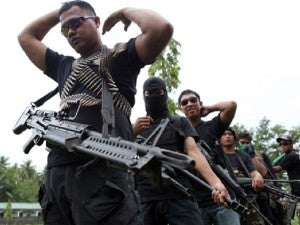 The attack at 5:30 a.m. Thursday was the fourth BIFF-instigated violence in North Cotabato in less than a week.

Government soldiers, however, intercepted the marauding rebels who were heading for the village, Mlang Mayor Joselito Piñol said.

Piñol said a heavy clash ensued between the soldiers and the attackers, numbering about 50 to 80 men, but there had been no reports of injury as of yet.

“Military howitzers immediately sprang into action and targeted an area, where the armed men are believed to be based,” he said.

Piñol said some Tibao villagers left their homes in a bid to skip harm and that the M”lang-Matalam highway was briefly shut down to traffic due to the fighting.

Soldiers continue to pursue the fleeing BIFF gunmen, he said.

Piñol said it was fortunate that the military had readied its forces as early as last week when intelligence reports had it that the BIFF would be mounting more attacks on the town because this has prevented the rebels from descending on populated areas.

Thursday’s incident was the fourth attack the BIFF has mounted in the province since Monday.

On Tuesday, BIFF gunmen also raided a banana plantation owned by Del Monte Philippines here and in nearby Tulunan town, barely a day after storming Malingao village in Midsayap town, where they took more than a dozen hostages, mostly teachers, and killed three soldiers and two civilians.

Mlang and Midsayap are among North Cotabato’s border towns with Maguindanao, where the BIFF maintains a strong presence, particularly in areas of the 220,000-hectare Liguasan Marsh.

Capt. Tony Bulao, speaking for the Army’s 602nd Infantry Brigade, said Thursday’s attackers were the same men who harassed a banana plantation in nearby Barangay Dungos in Tulunan on Tuesday that left one plantation security guard wounded.

The MOA-AD was later struck down as unconstitutional by the Supreme Court.