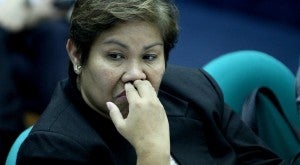 (An Investigative and Adjudicatory Division at the Office of the Deputy Executive Secretary for Legal Affairs had been created…According to them, they have received the complaint from Akbayan and have started to investigate on it.)

Akbayan on Jan. 23 filed a complaint at the Office of the President against Ducut, for her alleged failure to protect consumers against power rate hikes.

The group said it is President Benigno Aquino III who has the power to remove Ducut, a presidential appointee.