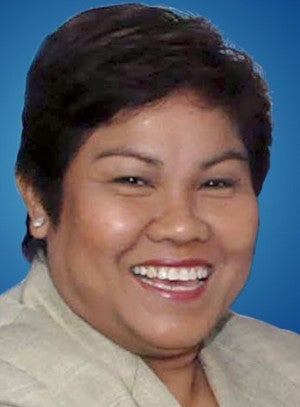 Ducut is currently the chair of the Energy Regulatory Commission (ERC), which last week approved Manila Electric Co.’s huge rate increase of P4.15 per kilowatt-hour amid Department of Energy suspicion of collusion among power generators to make a killing from the monthlong shutdown of the Malampaya gas pipeline.

Ducut represented the second congressional district of Pampanga from 1995 to 2004. In 2008, Ducut was appointed ERC chair by then President Gloria-Macapagal Arroyo, who now represents Pampanga’s second district.

Ducut has so far ignored calls from lawmakers to either take a leave of absence or resign as ERC chair after being implicated in the P10-billion pork barrel scam.

“Attorney Ducut is a friend of Madam Janet and acts as an agent to obtain projects using various government funds. I know her as a former congresswoman from the second district of Pampanga and she is now the chair of ERC,” Luy said in his latest testimony given on Nov. 26 to National Bureau of Investigation agent Allan Pascual and his lawyer Levito Baligod.

When the Inquirer reached her by phone to get her comment on Sunday, Ducut said: “I hope you respect my silence as of now.”

In his testimony, Luy claimed that Ducut used to regularly visit Napoles’ 25th-floor office at Discovery Suites in Pasig City to get her commission and the kickbacks of six lawmakers then.

Biazon recently stepped down as customs commissioner days after the NBI filed in the Office of the Ombudsman on Nov. 29 malversation, direct bribery, three counts of graft and violation of the code of conduct of public officials and employees against him and the other lawmakers.

Luy said that in some instances, Napoles would deposit Ducut’s commission through a fund transfer through the latter’s personal bank account.

Luy was president then of a Napoles nongovernment organization (NGO),

Social Development Program for Farmers Foundation Inc., which also used Ducut as a go-between to get pork barrel from lawmakers.

“I, together with Evelyn de Leon, Madam Janet or Ronald John Lim (Napoles’ nephew) prepare the money which we place in a box, a paper bag or a giveaway bag of JLN Corp.,” Luy said.

JLN is the company set up by Napoles—the alleged mastermind of the P10-billion pork barrel scam in which the Priority Development Assistance Fund (PDAF) of senators and congressmen was channeled to dubious NGOs of Napoles to facilitate kickbacks. She is now detained at Fort Sto. Domingo in Sta. Rosa, Laguna.

Luy noted that two of Napoles’ children—James Christopher and Jo Christine—also participated in dividing and preparing the “rebates” of the lawmakers.

De Leon is also president of another Napoles NGO, Philippine Social Development Foundation Inc., and one of the 34 accused in the second pork barrel scam case that covered PDAF transactions from 2007 to 2009.

Luy said the seventh lawmaker in the malversation case, Rodolfo Valencia (Oriental Mindoro), used another agent, Celia Cuasay, who also got a 5-percent cut like Ducut.

Cuasay is the mother of a classmate of Napoles’ son James, the whistle-blower said.

Asked how he validated the flow of the kickbacks, Luy said Ducut would bring vouchers to the JLN office together with the memorandum of agreement (MOA) and endorsement letter signed by the six former lawmakers.

Luy said both the MOA and endorsement letter were drafted at the JLN office and brought by Ducut to the lawmakers (now no longer members of Congress) and the heads of the implementing agencies for signing.

Luy said the vouchers (used as proof of receipt of the kickbacks) were kept for safekeeping at the JLN office, while a copy of the MOAs and endorsement letters could be obtained from the implementing agencies—National Agribusines Corp. (Nabcor) and Technology Resource Center (TRC)—used by the six former lawmakers.

“Most of the former congressmen received their kickbacks from Napoles through Ducut,” the NBI said.

Based on the NBI malversation and bribery case filed in the Office of the Ombudsman, Ducut received a total of P3.2 million in commissions for brokering a total of P64.09 million worth of PDAF from Biazon (P2.7 million), Pingoy (P20.91 million), Baterina (P9.6 million), Cagas (P15.36 million), Cagas IV (P7.55 million) and  Olaño (P7.97 million) for Napoles.

The former lawmakers received from Napoles between 34 percent and 78 percent of the supposed project cost as kickbacks.

Luy, however, could not explain the disparity in commissions among Napoles’ clients.

He said that he was intimately aware of these transactions because he was Napoles’ finance officer in charge of making daily financial records in her office and that he remembered these details because he saved them on his laptop’s hard drive.

Aside from the lawmakers and the Napoles agents, Luy said Napoles gave a standard 10-percent kickback to the heads of the implementing agencies—Alan Javellana of Nabcor and Antonio Ortiz of TRC.

After paying off the lawmakers, the agents and the heads of the implementing agencies, Napoles would pocket the rest of the funds (after deducting the cost of overpriced agriculture and livelihood kits provided by a Napoles-controlled supplier) “or the full remaining amount if there is no delivery at all,” the NBI said in its complaint.

Luy said all delivery reports and certificates of acceptance were forged to hide the ghost deliveries and beneficiaries.

Another whistle-blower, Marina Sula said Ducut was a regular at Napoles’ office and parties.

In her testimony given to the NBI on Sept. 12 (for the first case in the pork barrel scam), Sula said: “I always see her during the anniversary of JLN Corp., death anniversary of the mother of Madam Janet Napoles and at our office at Discovery [Suites] every time Madam Janet has a business to discuss with her.”

The first set of charges in the pork barrel scam was filed by the NBI and the Department of Justice last September against 38 people, including Napoles, Senators Juan Ponce Enrile, Jinggoy Estrada and Ramon Revilla Jr., former Representatives Rizalina Seachon-Lanete, Edgar Valdez, Rodolfo Plaza, Samuel Dangwa and Constantino Jaraula, senior staff of the senators and congressmen, agency heads and other government officials.

On Oct. 3, former President Arroyo, three of her Cabinet secretaries and 20 others, Napoles included, were charged with plunder in connection with the alleged theft of P900 million from the Malampaya Fund meant for storm victims in 2009.

Like the first set of pork barrel cases, the second would be using as evidence the testimonies and documentary evidence submitted by the whistle-blowers, who are former employees of Napoles, according to Baligod.