9 out of 10 ‘Yolanda’ deaths still unidentified 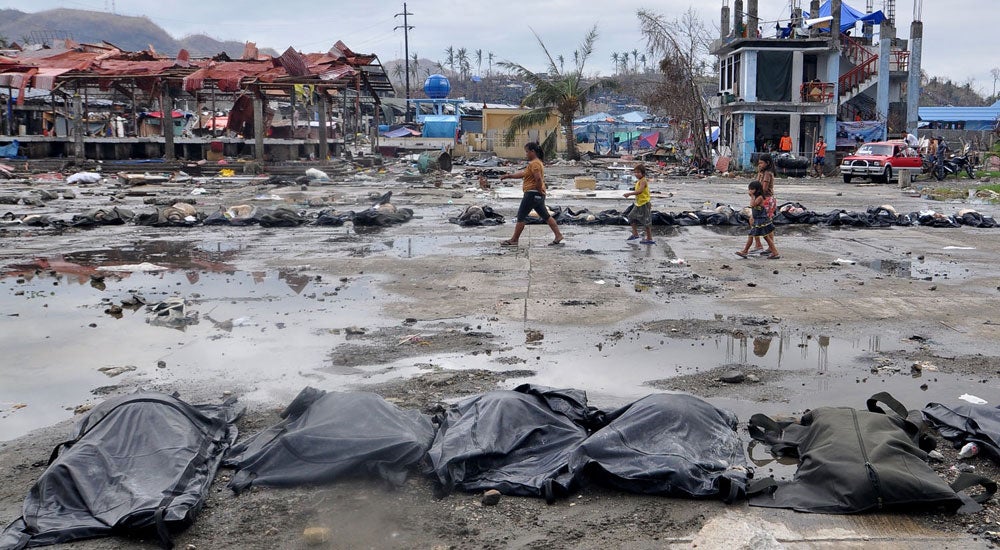 Nearly nine out of 10 fatalities in the onslaught of Supertyphoon “Yolanda” have remained unidentified more than a month after the storm hit the country, according to an official advisory. INQUIRER FILE PHOTO

Nearly nine out of 10 fatalities in the onslaught of Supertyphoon “Yolanda” have remained unidentified more than a month after the storm hit the country, according to an official advisory.

The figure was put out by the National Disaster Risk Reduction and Management Council (NDRRMC) on its website, but it differed with that obtained by the Inquirer from NDRRMC Executive Director Eduardo del Rosario, who put the number at “only” 33 percent of the total death toll.

Del Rosario said he would have the disparity in figures checked.

In its latest advisory, the NDRRMC said the death toll in the 24th weather disturbance to strike the Philippines this year had climbed to 6,057 as 24 more bodies were recovered on Saturday.

The council said 1,779 persons were still missing while 27,568 were injured in various typhoon-related incidents.

Of the actual retrieved bodies, a total of 5,333—or about 88 percent of the death toll—have yet to be identified, the council’s records showed.

Most of the victims died either by drowning or were hit by flying objects from collapsed structures as the typhoon triggered storm surges as high as 7 meters and powerful winds that leveled large swaths of the Visayas island.

In Tacloban City, regarded as the ground zero of the storm, 2,442 victims were still nameless as their families have yet to come forward to identify them.

In Palo town, located next to Tacloban, a total of 1,089 bodies remained unidentified while in nearby Tanauan town, authorities were clueless about the identities of 1,252 victims.

Rosario said it might take a while for the government to finish the identification of all those who died.

Since the government started looking for the fatalities, Del Rosario said 10 to 15 bodies were being retrieved daily by the team headed by Senior Supt. Pablito Cordeta.

He said about 1,900 bodies, or 33 percent of the total number of recovered victims, remained unnamed.

“After four, five or six days, you cannot identify the victims anymore. But until now, we’re still recovering 10 to 15 bodies every day,” Del Rosario said over the phone.

“It will really take time for us to finish the identification. In previous disasters, the government cannot tell if the missing person has been found or not because we do not have any records,” he said.

Told that the unidentified victims in the NDRRMC advisory accounted for 88 percent of the recovered bodies, Del Rosario said: “It’s only 33 percent. About 67 percent had been identified. I think your figure is wrong.”

When told that the Inquirer got the statistics from the NDRRMC’s own latest tally, he replied: “I will have that checked. What I know is that about 1,900 bodies were unidentified. That’s about 33 percent of the death toll.”

According to Del Rosario, the National Bureau of Investigation had been tasked with leading the proper identification of bodies.

In determining the identities of the victims, the NDRRMC executive director said NBI agents look for any identifying marks on the body.

They also get the body’s dental structure, he said.

After a body is tagged, the NBI keeps the records of the victim, he said.

“The identifying marks and the dental structures of the victims are very important in helping the families find their dead or missing relatives in the future,” Del Rosario said.

“If anybody would like to claim their dead family members, all they have to do is present their relatives’ dental records so we can match it from what we have gathered,” he added.

“Ultimately, the best method is the DNA test. But I’m not sure if the NBI is getting DNA samples from the recovered bodies.”

On the other hand, over 3.8 million people were still being served by government agencies outside the relocation centers.

The NDRRMC said the typhoon affected a total of 3,424,593 families composed of more than 16 million people in 12,139 villages in 44 provinces and 57 cities in nine regions.

Over P35.5 billion worth of infrastructure and agricultural products were also destroyed by Yolanda, which made six landfalls before heading to Vietnam.