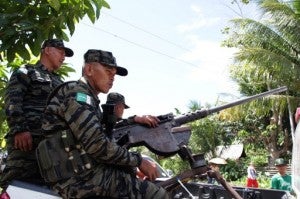 On Saturday, the parties signed the Annex on Normalization to the Framework Agreement on the Bangsamoro (FAB) and an Addendum on Bangsamoro Waters.  This annex lays out the process of decommissioning the MILF’s armed forces, and the addendum delineates a maritime territory for the future autonomous entity.

The breakthrough leaves the parties with only the task of compiling the consensus documents into the Comprehensive Agreement on the Bangsamoro (CAB).

IID used to be part of the global civil society support group that accompanied the peace process between the Republic of Indonesia and rebels fighting for the freedom of Timor Leste.

“Let us celebrate the panels, both as a group and as individuals, from former to current members, for their staying the course and championing peace. Let us cherish the moment when former opponents at the peace table came together with finality on common ideals, principles and terms, hammering out a clarion call for others to follow,” IID said.

“2014 is going to be a year of peace for Mindanao. With the signing of the last and final annex of the FAB on Normalization, the comprehensive peace agreement is practically achieved. Kudos to the peace panels,” said Mary Ann Arnado, secretary general of the Mindanao Peoples Caucus (MPC).

“I’m calling on all Mindanaoans to rally behind this political settlement formula. I am appealing to all political leaders to support this agreement in letter and spirit,” she said.

Patricia Sarenas, chair of the Mindanao Coalition of Development NGOs (Mincode), a coalition of 12 networks of non-government organizations and people’s organizations in Mindanao, said her group would continue to support the next steps towards the creation of the Bangsamoro government.

“Great blessings today! With the signing of the Normalization annex, the last annex to the FAB, we move closer to the creation of the Bangsamoro,” Sarenas said.

But aside from praises, the peace panels also got negative reactions.

“This is a violation of the 1996 Final Peace Agreement between the Philippine government and the MNLF. It serves as the last nail to the coffin of the peace agreement,” Mudjahab said.

Mudjahab claimed to have at least 10,000 followers in his MNLF faction.

“But we also see this as blessing in disguise because the abrogated agreement would mean we are back to the clamor of independence through peaceful political means,” he added.

He assured that his group’s “armed component” would be on a defensive mode “unless provoked or attacked.”

Cotabato City Vice Mayor Muslimin Sema, also a chair of another MNLF faction, however, said they were cautious about issuing statements for fear of being branded as spoilers.

Sema said the MNLF has been engaging the government in the tripartite agreement with the participation of the Organization of Islamic Cooperation (OIC).

“The fact is that the MNLF is still engaged in the tripartite agreement with the government of the Philippines with the participation of the OIC. And these three parties agreed to review the implementation of the agreement,” Sema said.