AFP ready to counter ‘spoilers’ to peace pact between 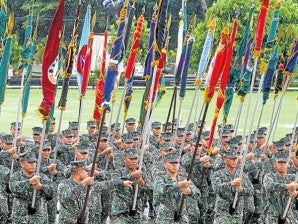 In support of the government’s initiatives to put an end to the decades-old strife in Mindanao, he said the military would continue conducting “development programs” by reaching out to the communities as drawn out in its IPSP (Internal Peace Security Plan) Bayanihan, the AFP’s anti-insurgency program.

Zagala said the military’s programs were intended to “further encourage and inspire support to the Bangsamoro Region.”

He said the military would stay vigilant against forces and threat groups, which might try to disrupt the peace agreement, a development that could also signal the end of the Moro secessionist movement in Mindanao.

“Rest assured that our focused military operations will continue to ensure that the peace process is not hampered or disrupted by spoilers and other threats,” he said.