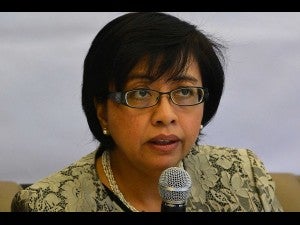 “We have just been discussing the next steps and our goal is to be able to get a good schedule for that,” she said from the Malaysian capital Kuala Lumpur where the last round of talks was held.

“We have set a time frame of between February and March,” she added.

On Saturday, both sides agreed on a “normalization” deal detailing how the rebels will hand over their weapons and the creation of a security force to police what will be a self-ruled Muslim region.

After the final deal is signed, President Benigno Aquino is expected to sign a “basic law” for the creation of a new autonomous region for the Muslims.

This would then be passed to Congress, and subjected to a referendum, with Aquino hoping to have it completed by the time he ends his six-year term in 2016.

Long years of insurgency have left much of the southern region of Mindanao volatile, with a proliferation of unlicensed firearms in the hands of other armed groups, including Al Qaeda-linked militants and offshoots that are opposed to the talks.

She did not specify any group, but the toughest challenge to the peace deal came in September, when hundreds of supporters of rebel leader Nur Misuari laid siege to a key southern port city, leaving more than 240 dead in three weeks of fighting.

“The next step is that we will have to talk about the final wording of the comprehensive compact agreement,” he said. “Meantime, a transitional commission will have to start drafting the basic law to be sent to Congress.”

He said he believed a final deal would be in place “soon” but that some members of Congress in the mainly Catholic country may oppose the agreement.

Ferrer however said the peace process was “on track” to meet Aquino’s deadline.

“We believe the majority of our people and our decision- and opinion-makers are on our side,” she said.

The United States, Japan and the European Union were also upbeat about the breakthrough, calling it a historic moment that could finally bring peace to the region.

“This agreement offers the promise of peace, security, and economic prosperity now and for future generations in Mindanao,” US Secretary of State John Kerry said in a statement.