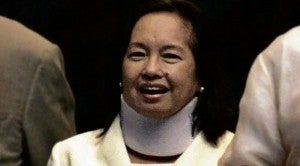 MANILA, Philippines—More Catholic Church leaders will visit former President Gloria Macapagal-Arroyo on Sunday to pray for her health, for “truth and justice” to prevail in her legal cases, and for the well-being of the survivors of recent calamities.

The four bishops coming to visit Arroyo at the Veterans Memorial Medical Center (VMMC) are scheduled to say a Mass at 11 a.m., according to Arroyo’s chief of staff, Raul Lambino.

“There will be a Mass at 11 a.m. today (Sunday) at the VMMC for the continuing recovery and improvement of FPGMA’s health which has deteriorated as per her doctor’s findings in recent months, for truth and justice to prevail in the cases filed against her, and for our countrymen who have suffered much from the grave calamities that happened in the recent past,” Lambino said in a text message.

Arroyo has been detained at the VMMC on plunder charges stemming from the alleged misuse of Philippine Charity Sweepstakes Office funds. She had asked to be confined at the hospital due to her poor health stemming from her spine condition known as cervical spondylosis, for which she had undergone surgery.

The four bishops expected Sunday are not the first Catholic leaders to visit the embattled former Chief Executive.

Earlier, Arroyo received an unlikely visitor in the person of retired Lingayen-Dagupan Archbishop Oscar Cruz, a vocal critic of her administration. Cruz wished Arroyo well and backed calls to have her placed under house arrest.

While several political leaders have urged that Arroyo be placed under house arrest, she has not filed such a motion in the Sandiganbayan, which is hearing her plunder case.

She has a pending motion for bail, however, which Lambino has said Arroyo is hoping would be granted on account of her frail health and her stature as a former president.