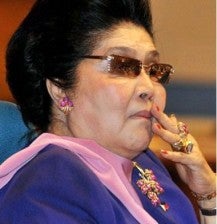 Arroyo’s lawyer Ferdinand Topacio said Marcos brought a bouquet of roses and a bottle of wine to the ailing Arroyo.

Topacio said Arroyo was happy that Marcos was able to visit her.

The lawyer said Marcos’ talk with Arroyo tackled many topics including the issue of the late  strongman’s burial at the Libingan ng mga Bayani.

According to Topacio, Imelda was emotional and so frustrated that the government is still refusing to allow the remains of her husband Ferdinand to be transferred to the heroes’ cemetery.

Arroyo is currently under hospital arrest for plunder charges.

She was charged with plunder by the Office of the Ombudsman in July last year for allegedly diverting public funds amounting to P366 million from the Philippine Charity Sweepstakes Office (PCSO) “for personal gain.”

Arroyo has asked the Supreme Court to stop the Sandiganbayan from hearing the PCSO plunder case arguing that the antigraft court “acted with precipitate haste” when it issued two resolutions without giving her the opportunity to file motions for judicial determination of probable cause.

Marcos said Arroyo has not been convicted of plunder and yet denied bail by the Aquino administration.

She described the former president’s condition in detention as “inhuman.”

The former first lady then recalled that her husband granted the plea of late senator Benigno Aquino Jr. to leave for the US to seek medical treatment even if he was already convicted for sedition.