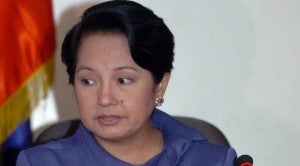 MANILA, Philippines — Former President Gloria Macapagal Arroyo still hopes to be granted bail in her pending plunder case, which is why she and her camp are not entertaining the idea of seeking house arrest for now, according to her chief of staff, lawyer Raul Lambino.

But Arroyo was nevertheless grateful to all the high-profile personalities who have called for her to be allowed to stay home while undergoing trial, Lambino said.

Arroyo is currently detained at the Veterans Memorial Medical Center.

According to Lambino, Arroyo was not yet thinking of house arrest because she still has a pending motion for bail in the Sandiganbayan anti-graft court.

“All these (house arrest proposals) are very encouraging words coming from known public personalities, but we have no plans at this moment for seeking house arrest until the pending motion for bail is resolved,” he said in a telephone interview.

He said the motion argues that the former president, who now represents her province in the House of Representatives,  should be granted bail because of her frail health and because she is a former chief executive and should be accorded a kind of courtesy.

Arroyo’s camp was optimistic that the Sandiganbayan would favor her arguments, he added.

“We’re confident that the motion for bail is strong given that the Supreme Court has rulings in heinous crime cases where the accused were granted bail on account of health reasons,” he said.

Arroyo has undergone surgery on her spine for cervical spondylosis, a condition where bones of the neck deteriorate and cause misalignment in the spine. She also had to wear a neck brace and has experienced difficulty in eating, causing her to lose weight.

Calls for her to be placed under house arrest came after she received a string of high-profile well-wishers at the VMMC.

Those who had come to see her were former Presidents Fidel Ramos and Joseph Estrada, and her vocal critics retired Lingayen-Dagupan Archbishop Oscar Cruz and evangelist Eddie Villanueva of the Jesus is Lord movement.

Cruz supported the idea of Arroyo under house arrest because of her health.

Senator Miriam Defensor Santiago was the latest to back house arrest calls, saying the former president was in pain and suffering and that being home would allow her to relax. Santiago added that there was no indication that Arroyo was out to stir unrest or economic paralysis.

Aquino no ill will towards Arroyo—Palace exec