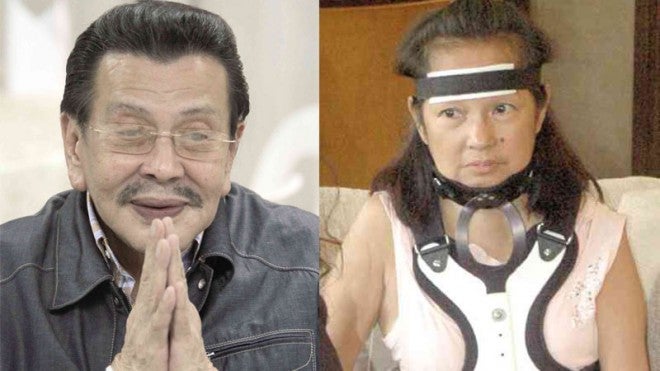 Their similarities, of course, don’t end there: Estrada was convicted for plunder, and now Arroyo, his successor, is on trial for the same crime.

He was a detainee for several years in the same hospital suite now holding her. The last time they met there was in May 2001: She was in power and a VIP visitor; he was incarcerated and down to a few loyal allies.

The roles were reversed Sunday afternoon when Estrada, now back in politics as mayor of Manila, visited Arroyo, now Pampanga representative, at Veterans Memorial Medical Center (VMMC) in Quezon City, her home since her arrest in October 2012.

“I believe in justice, but I also believe in compassion, especially in the spirit of Christmas,” Estrada said, speaking to reporters outside VMMC after his 2:30 p.m. visit.

“She looks pale, she has lost weight,” Estrada said of Arroyo, who as President pardoned him weeks after his plunder conviction in 2007.

“We didn’t talk about politics,” he said. Instead, the afternoon chat brought them back to the time he was detained at VMMC and when the antigraft court allowed him to undergo knee surgery in Hong Kong.

His spokesman, Ike Gutierrez, told reporters that the Manila mayor saw Arroyo mainly to thank her and “return the favor.”

Gutierrez recalled that when Estrada was first detained at a police camp in Sta. Rosa, Laguna province (before being moved to VMMC), “Gloria also visited him there. When he was ailing, he was allowed to seek treatment in Hong Kong.”

“Inside VMMC, atmosphere is one of amity and goodwill. Erap and GMA chatting happily,” Topacio said in a tweet. “Absent: politics and old enmities.”

In an interview, Domagoso said, “You could really sense the spirit of Christmas and what President-Mayor Erap had always been saying: that he had already forgiven all the people who did him wrong.”

“They talked about how they grew up in San Juan, where they went to the same school,” the vice mayor added. “It’s a good example showing how these two leaders who had conflicts in the past can spend an afternoon together having merienda, trying to forget what happened and trying to move on.”

Asked if Estrada brought something for Arroyo, Domagoso laughed and said: “I can’t tell. I’m not authorized.”