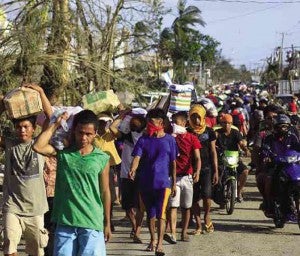 MANILA, Philippines—A priest supervising relief and rehabilitation work in Capiz said he was perplexed by how the Social Weather Stations arrived at survey results showing 73 percent of Yolanda victims were satisfied with the performance of the President during and after the onslaught of the super typhoon.

Father Mark Granflor, director of the Archdiocese of Capiz Social Action Center, said the people felt the overwhelming presence of foreign and local non-governmental organizations in Capiz but not the government’s.

The latest Social Weather Stations survey showed that 73 percent of the Yolanda victims gave a positive response on the performance of President Benigno Aquino during and after the typhoon.

The survey, which was conducted last December 11-16, a month after the super typhoon flattened provinces in the Visayas  showed higher satisfaction ratings for President Aquino among victims of Yolanda compared to those who were not victimized by the disaster.

The survey revealed that only 19 percent were dissatisfied with the President’s performance or a net satisfaction rating of +54, which is classified by SWS as “very good.”

Among non-victims, 69 percent were satisfied and 21 percent were dissatisfied, for a net satisfaction rating of +48 or “good”.

“When I heard that, I kept on smiling. I said where did they get this survey? How were they able to arrive at such result?” Granflor said in an interview on the Church-run Radio Veritas.

“When it comes to the government, sorry to say but the people did not quite feel the response of the government  during and after Yolanda,” Granflor said.

He said the local church’s social action center has started the second phase of their recovery and rehabilitation efforts.

“The people in Capiz are now slowly going back to their normal lives, trying to work to support their daily needs. But there are still a lot of people wanting to help,” he said.

He said the church has shifted from mere dole-outs to focusing on livelihood programs.