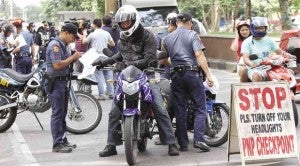 MANILA, Philippines—Banning the widespread practice of riding tandem on motorcycles is not going to deter crimes but is actually a proposal that would work against the poor, Akbayan Representative Ibarra Gutierrez said Saturday.

Gutierrez joined opponents of the move to ban two or more riders on motorcycles, or those riding tandem.

The move to ban the practice came about after a spate of crimes, mostly killings, carried out by men riding tandem on motorcycles.

But according to Gutierrez, this would be detrimental to millions of ordinary Filipinos who have turned to riding motorcycles as a cost-efficient and faster mode of transportation. It could be an economic burden for the poor, he added.

Motorcycles have become popular in recent years because of the poor state of the country’s mass transport system, the rising cost of gas, and  traffic gridlock that leaves four-wheeled vehicles stuck for hours on the road.

“This is a grave injustice; it violates human rights and severely discriminates against the ordinary, working Filipino citizens,” Gutierrez said of the proposed ban.

“This new riding measures could put restrictions on more than 7 million motorcycle drivers, stifles resources-sharing for people who use this mode of transportation to save on travel expenses, and sows undue suspicion and discrimination against motorcycle ride-sharers who are now being generalized as potential criminals,” he added.

He said just because two people are sharing a motorcycle does not mean they should be viewed as robbers or killers. It would not do to generalize, he said.

“We should not breed suspicions that, in the end, will prove detrimental to the welfare of the ordinary citizens,” he added.

He further pointed out that even law enforcement personnel and employees of government agencies have turned to using motorcycles.

Gutierrez  contended that banning tandem riding on motorcycles would not necessarily lead to a reduction in crime.

What would reduce crime local government units boosting their police forces and increasing police visibility, as these could deter criminals. Upgrading the equipment of law enforcement personnel would also help, he added.

Gutierrez said he backs the position of the Motorcycle Rights Organization and Arangkada Riders Alliance which are protesting moves to ban tandem riding.

“Public safety should be of great priority but we have to be prudent on the supporting measures that will be adopted. We have to make sure that it effectively addresses the issue that is being resolved and it does not harm the people, in both economic and social terms,” he said.