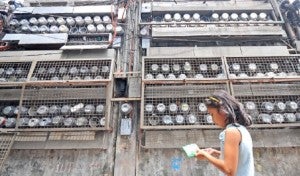 MANILA, Philippines – The government is determined to find ways to mitigate the impact of the power rate increase once the high court’s temporary restraining order on Meralco’s rate adjustment is lifted, Malacanang said on Saturday.

Communications Secretary Herminio Coloma Jr. said the government must find ways to ease the burden of the power rate adjustment to consumers.

“We should focus on that because the government is committed to look after the welfare of the consumers,” Coloma said on television.

Coloma said power industry players, such as Meralco and other power producers, would know that their businesses were imbued with public service and public interest and, therefore, they must act in favor of public good.

“That’s why they (power producers) should be true to their mandate of serving for the interest of the people and the government is ready to cooperate with them to fulfil their duty,” Coloma said.

Coloma said there was a need to study the existing power industry structure in the country to find a solution to high energy cost in the country that discourages investors to come in.

He added there was also an Energy Development Plan being carried out to ensure sufficient supply of electricity in the country which includes the use of renewable energy sources.

A rate adjustment was implemented by Meralco for their December billing
It has announced the rate increase was to be imposed in three tranches, as a result of the scheduled shutdown of the Malampaya gas plant.

The Supreme Court, however, issued last December a 60-day temporary restraining order on the P4.15 per kilowatt-hour increase by Meralco.

The high court’s order was aimed at stopping both the Energy Regulatory Commission (ERC) and Meralco from implementing the power rate increase.

Oral arguments are scheduled this January.

Aquino says he has no power to stop power rate hike