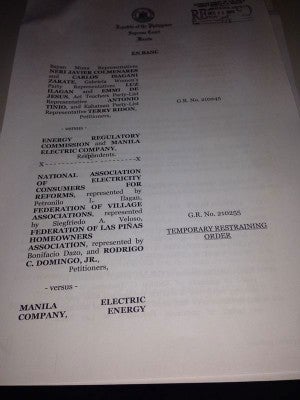 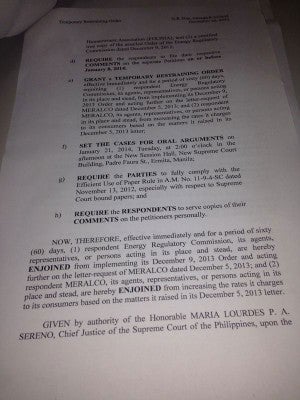 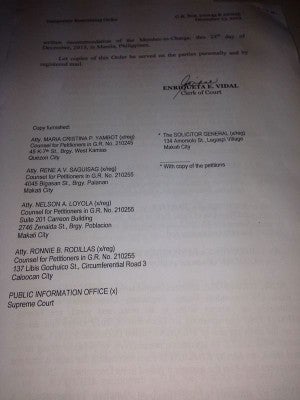 MANILA, Philippines — The Supreme Court prevented the Manila Electric Co. on Monday from implementing an announced increase in its electricity rate within the next 60 days at least.

The high court’s order came as Meralco had started to implement in its December billings the first phase of a staggered collection of an increase of P4.15 kilowatt per hour in the rate it charges its 5.3 million customers that was approved by the Energy Regulatory Commission last December 9. The rest of the rate increase was to be implemented in February and March next year.

The TRO was issued by the authority of Chief Justice Ma. Lourdes Sereno upon the recommendation of the justice who heads the division assigned to handle the case.

The high court is currently on a two-week holiday break.

The temporary restraining order directed the  ERC and its agents not to implement a  Dec. 9, 2013 order approving Meralco’s request for approval of its application for  an increase in the rate it charges its customers. It also ordered Meralco not to implement the increase it sought in its Dec. 5, 2013 letter to the ERC.

The high court ordered that the two petitions opposing the power rate hike be consolidated and ordered the ERC and Meralco to file their respective comments on or before  January 8.

The petitions were filed by the six party-list lawmakers from the so-called Makabayan bloc (Bayan Muna, Gabriela Women, Act Teachers and Kabataan Party list) and by a group composed of the National Association of Electricity Consumers for Reforms, Federation of Village Associations and Federation of Las Pinas Homeowners.

The court set oral arguments on the issue on January 21.

Asked what would happen in increased charges already implemented, Te said, “That would be addressed once the court decides” on the case.

Noting that the court order came two days before Christmas, Bayan Muna Representatve Neri Colmenares, one of the petitioners, said the TRO was a “Christmas gift of the SC to the much burdened consumers.”

“Besides, even with the statement of the Department of Energy, we cannot trust the supposed goodwill of the power cartel to defer their collection because without a clear TRO they would argue that they can collect the rate hike anytime. The TRO is legally stronger than a mere DOE-ERC announcement,” Colmenares said in a statement he issued a few hours after the Te announced the TRO.

Another petitioner, Petronilo Ilagan of Nasecor, praised the high court for its decision.

“We hail with great respect and gratitude the SC decision upholding consumer interest and we look forward to a favorable resolution granting our prayers,” Ilagan said in a text message.

Meanwhile, Justice Secretary Leila De Lima said that the TRO would not affect her department’s investigation into alleged collusion among power companies to jack up prices of electricity sold to Meralco by shutting down a number of power plans at the same time for maintenance work. The power plant shutdowns brought about a shortage in power supply.

“I can surmise that the investigations being done on the alleged collusion of power players in the Meralco rates is one of the considerations of the (high court) in the issuance of the TRO,” De Lima told reporters.

She pointed out that it was not only her department that was investigating alleged collusion among the power plant owners as the Senate and Department of Energy were conducting their own probes.

The Makabayan bloc  filed a petition for certiorari and prohibition against the ERC’s approval of Meralco’s proposal to pass on to consumers the increase in the generation cost for November.

It also questioned the constitutionality of two provisions of the Electric Power Industry Reform Act of 2011 which say that power generation and supply sectors are not public utilities and that their charges to the public are beyond ERC regulation.

Both petitioners askedfor a TRO or a status quo ante order from the high court and got it on Monday.