MANILA, Philippines – Ironic that a man who was found guilty of offending “religious feeling” is actually a fervent Black Nazarene devotee.

For the last 10 years, Carlos Celdran has been fulfilling his vow to participate in what he deems a “distinctively Filipino” celebration of the Black Nazarene feast, considered one of the world’s biggest Catholic processions.

Celdran, a tour guide, gained the public’s attention in September 2010 after standing in front of the main altar of Manila Cathedral during an ecumenical service dressed like Jose Rizal shouted and raised a placard with the word “Damaso” on it.

His “Damaso” protest against the Catholic Church’s opposition to the Reproductive Health bill then pending in Congress offended Church authorities. In January last year, he was then put behind bars after the Metropolitan Trial Court found him guilty of offending religious feeling.

“Despite the fact that I did the ‘Damaso,’ I’m a firm believer of the Black Nazarene… I think it sort of relates to my sense of being Filipino and my devotion to all that is divine,” Celdran told INQUIRER,net, while he was at the Quirino Grandstand, where a mass was held to mark the start of the celebration.

“I’m a very practical person. There’s a lot of things in the Catholic Church that I do not agree with but there’s something about the way the Black Nazarene hits the Filipino soul that for me resonates,” he added. 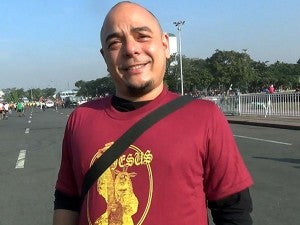 Compared to the last 10 years, Celdran noted that the volume of crowd this “Traslacion 2014” was bigger.

“It’s nice to see that a lot of Filipinos are appreciating the Black Nazarene devotion… It wasn’t this big before. I think 10 years ago, [the crowd only went up] from 2 to 3 million,” he said.

For squeezing himself in the thick raucous crowd during the procession, Celdran believes it’s worth it.

“[Because] the things I asked from Him have always been granted.”

“And I have to say, if you look at my life, my life is pretty good. Thanks, Black Nazarene,” he added.