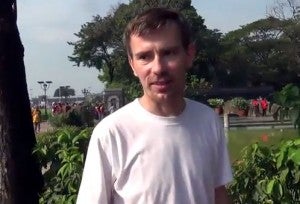 MANILA, Philippines—It’s not only local devotees who would travel for miles and battle through a sea of ecstatic devotees just to touch the centuries-old black statue of Jesus Christ known as the Black Nazarene.

Some foreigners do, too.

American tourist Gerry Blevins got a baptism of fire when he was lured to the massive daylong pilgrimage and took part briefly in the procession.

He said touching the Black Nazarene image gave him a tough time, but added that “people just got to have the patience.”

“It’s a once in a lifetime thing. You only get one chance to do it,” he told INQUIRER.net.

As the procession kicked off at Quirino Grandstand on Thursday morning, the crowd swelled in minutes and Blevins was among those who swarmed to the carriage.

A native of Delaware state, the American national said he came to the Philippines for his Filipina girlfriend and that it was his first time to participate in the Black Nazarene procession.

“At first, when I got here at 1 p.m. there’s just insanity trying to get to touch the Black Nazarene,” he jokingly said.

Blevins chose not to take off his shoes for fear of hurting his feet when he joined the procession that trudged through garbage-strewn route of Nazarene’s journey.

Just for a little thrill, Blevins said he climbed a tree to capture the Black Nazarene being revered by millions of devotees in the most unusual way.

But despite the raucous crowd, he said he still believes that the Philippines is “much nicer [place] than the United States.”

The wooden statue of Christ, crowned with thorns and bearing a cross, is believed to have been brought from Mexico to Manila on a galleon in 1606 by Spanish missionaries. The ship that carried it caught fire, but the charred statue survived and was named the Black Nazarene.

Some believe the statue’s survival of fires and earthquakes through the centuries, and intense bombings during World War II, are a testament to its mystical powers. With a report from AP