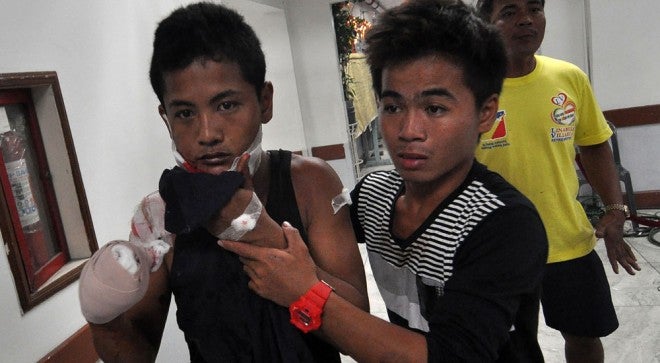 Police in Ilocos Sur province on Thursday formed a task force to look for a person who fired the gun whose bullet killed 3-month-old Von Alexander Llagas in Caoayan town on New Year’s Eve as more cases of stray-bullet injuries were reported across the country.

A 2-year-old boy and a woman were added to the number of victims of indiscriminate firing during the holiday season, the Philippine National Police (PNP) said Thursday.

The latest victim was Jahred Stephan Bitacora, of Barangay (village) Aplaya, Digos City, who suffered a gunshot wound in his left hand.

Bitacora, 2, was with his father watching a fireworks display near their home around midnight on Dec. 31 when the incident occurred, said Senior Supt. Ronaldo Llanera, Davao del Sur police director.

Carmen Samson, 50, of Rosario, Batangas province, was hit on her right leg by a bullet from a .45-cal. pistol.

In Pasig City on Tuesday night, a bullet tore through the roof of a house.

Ramon Cariol, an overseas Filipino worker, noticed the hole on the roof of his residence on Sto. Niño Street in Barangay Palatiw around 11:30 p.m., according to a police report.

Upon searching, he discovered a bullet of a still-unknown caliber in a room, the report said.

The incident took place minutes before a stray bullet hit the forehead of 2-year-old Diane Vocal in Barangay Caniogan. She survived.

As of Thursday morning, the number of fireworks-related injuries rose to 804, including stray-bullet injuries, according to the Department of Health (DOH).

Out of the cases, 793 were fireworks injuries, 459 of which were caused by illegal firecrackers, such as piccolo and 5-star.

The DOH based the data on reports of 50 hospitals nationwide as of Jan. 2.

Mayor said local police units had been ordered by the PNP chief, Director General Alan Purisima, to exert all efforts to identify and arrest the persons responsible for indiscriminate firing in their respective areas of jurisdiction.

“The PNP is gathering evidence to identify and locate those behind these incidents of illegal discharge of firearms,” Mayor told the Inquirer on the phone.

He said 15 persons, including three policemen, had been arrested for firing their guns during the New Year’s Eve celebrations.

Mayor said the PNP Firearms and Explosives Office was helping police investigators to identify registered gun owners near the residence of the victims of stray bullets.

In Naga City, the Philippine Army said two of its personnel had been placed in the custody of the military police in Naga City for the illegal discharge of their service firearms.

As of Thursday, the group headed by Supt. Feliciano Gubatan, deputy operations chief of the Ilocos Sur police, had yet to receive information that would lead them to the person who fired a shot that killed baby Llagas.

Senior Insp. Reynaldo Mendoza, Caoayan town police chief, said the slug removed from Llagas’ head had been taken by personnel of the PNP regional crime laboratory in San Fernando City in La Union province so they could determine the type of firearm that killed the baby. The test’s results will be released on Jan. 3.

Mendoza said the police also made an inventory of licensed gun holders in the victim’s home village of Barangay Anonang Mayor. Their guns, he said, would be inspected and subjected to ballistic examination.

He said the police were expecting a PNP technician who would determine the bullet’s trajectory and plot the possible location of the gunman when he fired his gun at 11:50 p.m. on Dec. 31.

Ilocos Sur Gov. Ryan Luis Singson on Wednesday offered a P250,000 reward for people who could offer information that would help solve the case.

Valeriano Llagas, the boy’s father, said he was looking forward to celebrate his birthday on Jan. 3 with his family but the tragedy struck.

He said it would have been the first time he would celebrate his birthday with Von, the youngest of his four children.

“I am hoping that this case would soon be solved to ease our sadness and pain a bit,” he told the Inquirer.

Valeriano, a foreman for a construction firm in Bataan province, said the holiday break was only the second time that he had spent with Von because he returns home to Ilocos Sur only every quarter.

He said he was left to take care of their four children at home earlier on Dec. 31 as his wife, Vanessa, a laundrywoman, had to work that day.

“We were home the whole day, playing with my children, as we awaited the New Year’s Eve celebration,” he said.

Von was hit by the stray bullet in the head as he was sleeping beside his father before midnight struck.

Vanessa said she could not bear Von’s loss. “They took our angel away,” she said.

In North Cotabato, at least 49 cases of firecracker-related injuries in December had been reported in at least seven towns, the provincial health office there said.

The town of Mlang has the biggest number of firecracker injuries with 17 cases, followed by the town of Midsayap with 12 cases; Alamada, 2; Kidapawan City, 2; and Arakan, 1, she said.

“The data covered incidents from Dec. 25 to the first day of January,” Rabaya said.

She said the number of firecracker cases in 2013 was higher by nine compared with the 2012 figure.

In Pangasinan, the provincial health office said the number of firecracker-related injuries almost doubled from Wednesday to Thursday as reports started trickling in after the New Year revelry.

Dr. Anna Ma. Teresa de Guzman, provincial health officer, said from only 63 on Wednesday, the number of those injured increased to 123.

Most of the victims were treated at the Region 1 Medical Center in Dagupan City, Pangasinan Provincial Hospital in San Carlos City and at Lingayen District Hospital in Lingayen town.

But De Guzman said the number was still lower than the 149 cases recorded in 2012. She said most of the victims were children, aged 10 to 14.

In Central Luzon, police said the number of firecracker blast victims in the region reached 151 on Jan. 1. The figure was higher by nine than the number in 2012. Bulacan province recorded the highest, with 40 people hurt.

Saying it was tired of hearing about firecracker-related stories, Malacañang on Thursday sought to rally the public behind a “concrete solution” and safe alternatives such as community fireworks displays.

“Every New Year’s Day, we are greeted with headlines on hundreds of injured persons as a result of firecracker explosions, as well as casualties from stray bullets,” Communications Secretary Herminio Coloma said in a statement.

“We can ill afford to wait for another New Year’s Day celebration marred by similar injuries.”

“Hence, we call on all stakeholders to reach a common stand on safer alternatives for celebrating New Year’s Day through local ordinances or enactment or amendment of existing national laws,” he added.

The DOH has vowed to push for the banning of firecrackers in the country even as it admitted that it would likely face an uphill battle against the tradition of merrymaking during the Christmas and New Year’s Day celebrations.

Health Undersecretary Janette Garin said the chances of being able to pass a law banning firecrackers are slim considering the concerns of various stakeholders in the firecracker industry, particularly on the potential job losses.

“It may be difficult to pass a law banning firecrackers,” said Garin at a press briefing.

“Yes, it gives livelihood to some people, but how about the lives lost because of it?” she said.

But Garin said the DOH was not pushing for a total ban on all fireworks.

“We want a total ban on firecrackers and only a selective ban on fireworks since we also have to consider those whose livelihood depends on it,” she explained.