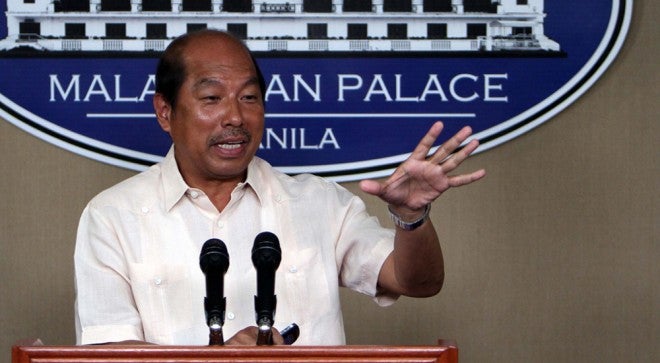 Budget Secretary Florencio Abad said Thursday an agency can begin obligating funds as soon as the 2014 GAA is implemented on the very first working day of the fiscal year. INQUIRER FILE PHOTO

The Department of Budget and Management (DBM) announced Thursday the demise of special allotment release orders (Saros), which were faked last year as part of what it called a “well-established and highly coordinated racket.”

That’s because the General Appropriations Act (GAA) is now considered the government’s “official budget release document.” As a result, departments and agencies “will no longer need to secure Saros to obligate funds,” the DBM said.

In a statement, Budget Secretary Florencio Abad said an agency could instead begin obligating funds as soon as the 2014 GAA was implemented on the very first working day of the fiscal year.

“With the new GAA-as-release-document regime in place, however, and the fact that Saros are no longer needed for many of the fund releases we’ll be making this year, we don’t just intend to accelerate releases so that they can properly fund our key programs and projects,” Abad said.

“We also mean to thwart those who’ve made the budget implementation process a hotbed of graft and corruption. This is part of our deliberate, focused campaign to facilitate greater transparency and accountability in the expenditure process, so that every peso spent by government will indeed benefit all Filipinos.”

The National Bureau of Investigation is still probing the use of bogus Saros for farm-to-market roads worth P879 million.

The NBI has identified some of the members of the “Saro Gang” alleged to be responsible for the photocopying of original Saro to secure the release of pork barrel funds for public projects.

De Lima said the NBI was looking at the alleged participation of a driver and a janitor in the office of Budget Undersecretary Mario Relampagos. “We have their names but we can’t reveal them yet. The NBI is still looking into other personnel.”

Abad said the DBM was made aware in 2013 “of a well-established and highly coordinated racket that centered on the dissemination of fake Saros.”

“Altogether, however, it appears that unscrupulous individuals have taken advantage of the necessity of release documents so that these parties were able to profit from the distribution of fake Saros.”

Last Dec. 20, President Aquino signed the general appropriations act for this year’s national budget worth P2.265 trillion. Six days later, he signed the P14.6-billion supplemental budget, mainly for the rehabilitation of areas devastated by Supertyphoon “Yolanda” and other recent calamities.

Of the supplemental budget, P11.2 billion will be used to augment the existing calamity fund, while P3.4 billion will be added to the Department of Social Welfare and Development’s “quick response fund.”

In the past, the DBM issued Saros to allow the release of funds for lump-sum items, such as the Priority Development Assistance Fund, a pork barrel of legislators that the Supreme Court ruled unconstitutional on Nov. 19, 2013.

But in the so-called “new regime,” a “first of its kind in the country’s governance history,” where the national budget document itself already authorizes budget release, lump-sum allocations will still require approval before they are released.

These will include “lump-sum funds within an agency’s budget that have not been itemized prior to the approval and enactment of the 2014 GAA, as well as Special Purpose Funds (SPF), including Budgetary Support to Government Corporations.”

Abad said the 2014 GAA, as signed by Aquino, was the government’s primary budget release document.

“This means that all the disaggregated budget items in the GAA are already considered released to their respective agencies, with the exception of lump-sum funds that have yet to be itemized and which will require prior approval before their release.”

Critics consider the SPF as the President’s own pork barrel because of their lump-sum nature and because they could not be released without his approval.