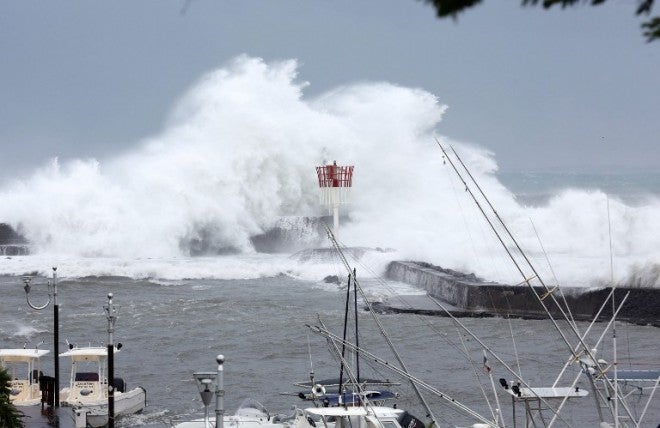 A cyclonic swell sweeps a pier on January 2, 2014, in Saint-Gilles, in the French La Reunion overseas island. The Indian Ocean island was placed on red-alert Thursday, due to the Bejisa hurricane with gusts between 120 and 150 km per hour and may even exceed 200 km per hour on the reliefs exposed. AFP PHOTO RICHARD BOUHET

Two of those hurt were in serious condition after falling from a roof and a ladder while trying to secure their homes, local officials said. The other 13 were slightly hurt in similar incidents despite warnings against venturing outside.

State-run power supplier EDF said downed lines cut electricity to about 170,000 households on Reunion. Around 200,000 people—roughly a quarter of the island’s population—had water cut to their homes. Many roads were made impassable by fallen trees and flooding.

The eye of Cyclone Bejisa passed within 15 kilometers (10 miles) of the western side of Reunion Island and was now headed south.

“The worst is over, but the winds will continue to blow strongly” over much of the cyclone-prone island, meteorologist Philippe Caroff said.

At its peak, the cyclone sent waves of more than eight meters (26 feet) crashing into the coast.

The deputy mayor of the western town of Saint-Leu had ordered those living near the seashore to leave their homes and take shelter further inland.