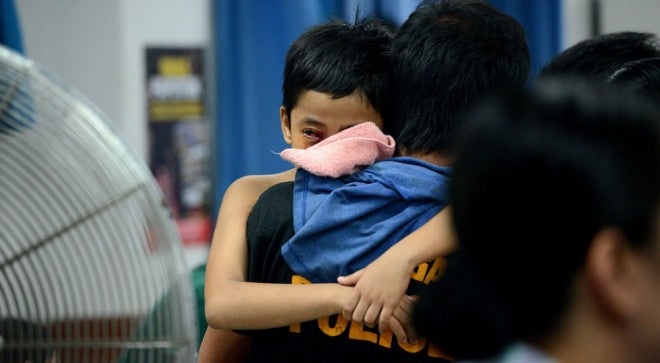 A boy injured by a firecracker arrives at the Jose Reyes Memorial Medical Center in Manila early on January 1, 2014, after new year’s celebrations. Philippine authorities said more than 260 people had been injured by fireworks, firecrackers or stray bullets in the days leading up to New Year’s Eve. AFP

Based on the latest report by the Philippine National Police, six more people were hit by stray bullets during the New Year revelry.

Senior Superintendent Wilben Mayor said two of the six victims were two-year-old children, one from Pasig City and the other from Digos City in Davao del Sur.

The two injured children were identified as Margaret Diane Vocal from Pasig City and Jared Stephan Bitacora from Digos City.

Vocal was hit on the forehead while Bitacora was hit on his left hand.

Few hours before New Year, a stray bullet pierced through three-month-old Von Alexander Llagas’ head as he slept beside his father in their house in Ilocos Sur.

Llagas was the lone fatality from the 30 stray bullet incidents.