Mayor Binay should have been told to go on leave, says Alan Cayetano 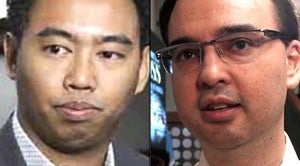 MANILA, Philippines—Senator Alan Peter Cayetano on Friday said Vice President Jejomar Binay should tell his son, Makati Mayor Jejomar Erwin Binay Jr., to go on leave to give way to an investigation of his behavior toward security guards at an exclusive residential subdivision in Makati three weeks ago.

Weighing in on the controversy, Cayetano said responding to Mayor Binay’s insisting on an exemption from the subdivision’s security rules posed a tough challenge to President Aquino, Vice President Binay and Interior Secretary Mar Roxas.

“Since the son of the Vice President is involved—we’ve seen how the President is piqued by abuse and how he loathes [sirens], a Porsche-driving clerk … a mayor who slaps [her] constituents—so what will be the response?” Cayetano said at a press briefing.

He was referring to President Aquino’s good government policy, which includes a prohibition on official display of authority, such as using sirens to get ahead on the road.

Mr. Aquino laid down the policy during his inauguration on June 30, 2010.

Embarrassed, the Vice President apologized to all the motorists who were inconvenienced.

His press officer, Joey Salgado, said at the time that the Vice President reminded his security escorts that they should obey traffic rules.

Now how will the Vice President deal with his own son’s behavior toward three security guards at Dasmariñas Village? Cayetano asked.

“Will he treat him any differently? Or will he give him special favor? Is this a preview of a Binay administration if he becomes the President?” Cayetano asked.

“If I were the Vice President, I’d do something simple. I’d tell [my son]: ‘Mayor Junjun, go on leave for 15 days. Secretary Mar, remove the chief of police, investigate him. If my son is proven innocent, the papers and TV networks that aired the malicious story should apologize. If my son is liable, charge him,’” Cayetano said.

“If you want to be President of the country and you want an administration that is free of abuse, you have to make a painful decision,” the senator added.

But the Vice President defended his son in a television interview on Friday, saying the Makati mayor deserved “a little courtesy.”

Mayor Binay, riding in a four-vehicle convoy, was leaving Dasmariñas Village around midnight on Nov. 30 and wanted to use the gate at Banyan Road, which is closed to outgoing traffic after 10 p.m. for security reasons.

Residents of the subdivision, including lawmakers, diplomats and celebrities from the entertainment industry, follow the security rules and use the gate at Palm Avenue in going out after 10 p.m.

When the security guards at the gate refused to let the mayor’s entourage through, Binay got off his car and confronted the lead guard.

“Don’t you know me? (Hindi mo ba ako kilala?)” the mayor said, according to a source who told the Inquirer about the incident.

The confrontation was captured on the subdivision’s security cameras, which showed the guards, apparently unimpressed, standing their ground.

The video showed agitated movements by the mayor’s escorts. It also showed the mayor’s sister, Sen. Nancy Binay, who was in one of the vehicles, getting off, as if to show herself to the guards.

Still unimpressed, the guards refused to raise the security bar at the gate.

The source said the mayor called the police on his cell phone.

The video showed a bodyguard of the mayor loading a clip into a semiautomatic pistol and cocking it.

Mayor Binay’s camp said later that the guards were not arrested. They were released after four hours and no charges were filed against them.

The mayor’s camp also said the security guards and their company, Right Eight Security Inc., apologized to the mayor and the matter was considered closed.

Not for Cayetano, who said he was saddened by the Vice President’s statement that his son should have been accorded courtesy.

“No amount of need of courtesy will justify your willingness to kill people. Remember these security guards are professionals. We all know the Binays, and know that their security men are professionals,” Cayetano said.

“You don’t cock a gun if you have no intention of firing it. Are you saying you’re ready to kill just because you’re barred from passing through?” he added.

Cayetano said Roxas should order an investigation of the incident even without any complaint from the security guards.

“It might seem like a small issue for others. But in the eyes of the poor, this is wang-wang, this is abuse. And the difficult part is you’re ready to kill just because you’re barred from passing through,” he said. “My point is, will we sweep this under the rug just because the Vice President says it’s just an issue of courtesy?”

If another mayor from Mindanao, or northern Luzon was involved, there would have been strident calls for his or her resignation, Cayetano said.

“The issue is not because he is a Binay. The issue is because of the abuse, and my personal information is this is not the first time this has happened,” he said.

There was no reaction from Malacañang and from Roxas as of Friday, a silence that, according to political analysts, highlighted Filipino officials’ sense of entitlement.

“It is a sad commentary on the type of leaders that we have,” Prospero de Vera, a professor at the University of the Philippines, told the Inquirer.

“Most don’t want to talk about it because they also do that. Or most of them believe Binay is correct,” De Vera said.

In separate interviews, De Vera and Ramon Casiple, executive director of Institute of Political and Electoral Reform (IPER), said most politicians felt they had the same entitlement that Binay showed when he accosted the guards of Dasmariñas Village who would not let his convoy pass because the gate was already closed.

Asked why there was no condemnation of the incident from government officials, Casiple said the explanation was simple: “Usually, they think they have to be given special treatment as high officials.”

Casiple said that normally, subdivisions give public officials “courtesy” at the gates.

“Usually, one just calls (the person in charge) if an official wants to go out through a closed gate. I am puzzled this got out of hand” he said.

Casiple surmised something must have happened that “we don’t know about.”

From the Department of the Interior and Local Government (DILG) to the Philippine National Police (PNP) to the Senate to the House of Representatives and even Malacañang, not one voice has been heard to take up the cudgels for the security guards.

In 2011, the DILG, which has administrative control and supervision over local governments, recommended the filing of administrative charges against then Davao City Mayor Sara Duterte for punching a court sheriff who tried to serve a notice of eviction on illegal settlers in the city.

The Inquirer tried to reach Roxas, but was told he was in a meeting.

The interior secretary seemed unusually quiet on the raging controversy.

Roxas and Vice President Binay are said to be the strong contenders for Malacañang in the 2016 presidential election.

Guards to be honored

The security guards who figured in the controversy will receive plaques of appreciation from residents of Dasmariñas Village.

Mike Bucoy, general manager of Dasmariñas Village Association, said the plaques of appreciation would be handed to the security guards during the employees’ Christmas Party.

Bucoy said the security guards did nothing wrong by refusing exit to Binay’s group at the Banyan gate.

He added that the village did not have a VIP policy, contrary to the statement of Ram Antonio, head of Eight Right Security Inc. With reports from Nikko Dizon and Nancy Carvajal