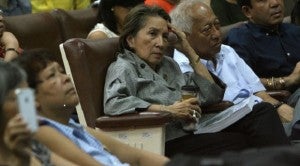 Monsod, a resident of the village, said: “The guards were correct… And Mayor Binay was obviously wrong. He was taking advantage of his position and trying to be above the law. And anything that goes above the law is wrong.”

The Philippine Daily Inquirer reported that Binay on November 30 ordered the arrest of three security guards who denied their convoy access to a gate in Dasmariñas Village. However, the guards insisted that the group could not leave through the gate because of the 10 p.m. curfew. Binay then called for the police to arrest the guards. A CCTV footage from a source was released by INQUIRER.net.

However, Binay camp spokesperson Joey Salgado said the guards were not arrested. Instead, he said they went with the Makati police voluntarily and stayed at the precinct for about an hour.

Monsod told INQUIRER.net in a phone interview that she was familiar with the policy of the village restricting access to one of the main gates after 10 p.m.

“His alternative was to go about 150 meters away to the gate that was open. But he wanted to show his…I don’t know,” Monsod said.

“And the fact that his guards pulled out their weapons is…this is an indication of how Binay is going to rule the country,” she added.

Monsod revealed that the village is planning to commend the three security guards for doing their job.

Village manager Mike Bucoy, in a separate interview, said their guards did nothing wrong and their rules “apply to everybody.”

Earlier, the security agency who employed the guards said they have apologized to the Binay camp.

But Monsod said, “the owner of the security agency has no business talking for the Dasmariñas Village Association. “

She said Ram Antonio of the Right Eight Security Agency was a supporter of Binay.