A year after ‘Pablo,’ Davao Oriental towns not yet cleared of debris 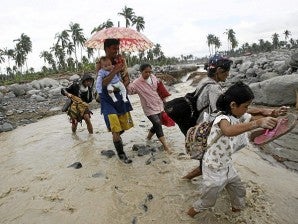 DAVAO CITY, Philippines — The provincial government of Davao Oriental has expressed concern over the fact that three municipalities in the province, which were severely hit by typhoon “Pablo” a year ago, are still littered with storm debris.

Governor Corazon Malanyaon, in her report read by Engr. Jesusa Timbang, the provincial disaster risk reduction and management officer, at the Year-End Annual Regional Disaster Risk Reduction Management (RDRRM) recently, said that despite the support of various national and foreign agencies in debris management in the hardest hit towns of Boston, Cateel and Baganga in December 2012, only 15 percent of the debris have been cleared from the scene and properly disposed of.

“The remaining 85 percent are still left to rot in the field,” she said.

Malanyaon said pests like rhinoceros beetles have been breeding in the debris. These pests could destroy recuperating coconut trees. If left unattended, this might spread to neighboring towns with healthy coconut trees, and even to the entire province, she added.

The province has created a debris management plan to address the problem.

The debris caused by typhoon “Pablo” include construction leftovers of private and public infrastructure projects and 3.5 million fallen coconut trees.

The provincial government plans to process the trees to lumber through cash-for-work programs, or convert them into handicraft products.

The Mindanao Development Authority, United Nations Development Program and the Philippine Coconut Authority are helping in the implementation of the debris management plan.

The three towns are also putting up debris processing centers.

Logs, timber washed away by ‘Pablo’ to be used for shelter of typhoon victims
Foreign aid pours in for ‘Pablo’ victims

Learning the lessons of ‘Pablo’ for the nth time