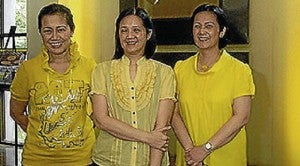 DAVAO CITY, Philippines – The construction of 1,000 pre-school classrooms, a project of a foundation headed by President Aquino’s sister, Pinky Aquino-Abellada, is now becoming a reality.

Aquino-Abellada announced here, on Tuesday, that some 700 classrooms have been turned over by Aklat, Gabay, Aruga tungo sa Pag-angat at Pag-asa (Agapp) Foundation to various pre-schools across the country since the project started about three years ago.

“As of date, 700 classrooms were already built by the foundation with the help of its generous partners and volunteers,” she said during a visit here.

Aquino-Abellada was here for the turnover of a classroom to Union Elementary School, the fourth that AGAPP gave to Tagum City, Davao del Norte.

“Day care centers and preschool programs are essential to planting the seeds of literacy,” Aquino-Abellada said in rationalizing the project.

AGAPP is a foundation that involves the United Nations Children’s Fund and the Japan Fund for Poverty Reduction, and works with the Asian Development Bank and private companies including San Miguel Corp., Smart and National Bookstore.

Mayor Allan Rellon said the city government has been working with various groups as education has become its top priority.

Aside from building classrooms, the city government also builds school chairs and desks out of confiscated logs seized by the Department of Environment and Natural Resources.

There was also the palengke eskwela, where market vendors avail of literacy classes through the use of computers.

AGAPP also undertakes other programs that could help children go to school, according to Aquino-Abellada.

These programs, she said, have included micro-enterprises for parents to enable them to send their kids to school.

Aquino-Abellaneda said that many children from poor families have not been able to attend the public day care or public preschool programs.

Read Next
DA urged to turn over Nabcor branch to N. Cotabato local gov’t
EDITORS' PICK
Acer starts the year off strong with the Aspire Vero National Geographic Edition
The best of bayside and city living at SMDC’s Sail Residences
EDITORIAL: Protecting the polls’ integrity
COVID-19 virus spread slowing down in Metro Manila, says OCTA Research
Over 3 Million worth of prizes to be won at Smart Padala’s SENDali Manalo Promo!
Comelec junks petition to scrap Bongbong Marcos COC
MOST READ
Drug lord Espinosa tried to escape through air vent at detention facility – NBI
In Batanes, octogenarian dies of COVID-19
When to get boosters after positive COVID test
Marcos Jr. visits Cebu, stands as ‘ninong’ to mayor’s son
Don't miss out on the latest news and information.