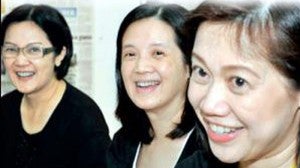 SYDNEY, Australia—President Benigno Aquino III sees nothing wrong with the partylist group Akbayan being part of his administration and even receiving P14 million from his three sisters as campaign contribution in the 2010 parallel partylist election.

“It’s one thing to ask for the delisting, perhaps, it’s another thing to prove it. They are allied to us but it doesn’t make them any less of representative of marginalized sectors,” said Mr. Aquino.

The President made this statement when asked during a meeting with the Philippine media delegation over coffee at a hotel here Thursday about calls for Akbayan to be dropped from the list of accredited partylist groups since they are no longer considered marginalized on account of their noticeable presence in the Aquino Cabinet.

Asked about his sisters’ donation, the President said that as long as they were not violating “spending limits,” this was not illegal.

“Is that an issue? If you’re a marginal party, or a party … representing a marginalized sector, you’re not entitled to have supporters? How does a political party exist without supporters?” he said, but quickly added:

“As far as my sisters are concerned, I’ll have to check the records. I don’t remember all of the details.”

An election expenditure document submitted by Akbayan to the Commission on Elections disclosed that Akbayan received a total of P112 million in political contributions during the May 2010 elections.

The statement said Akbayan received a total of P112,183,000 in contributions from individuals and political parties while its election expenditures reached P112,174,008.70.

The claim that one ceases to be a marginalized party as soon as it allies itself with the ruling power does not sit well with the President.

“They [Akbayan party-list members] are not marginalized because they are allied with us?” he asked.

The President said Akbayan had long been accredited as representative of marginalized sector.

“They can demonstrate [this through] the Mapalad farmers, amongst others,” he said.

Former Akbayan Representative Risa Hontiveros, who ran but lost in the 2010 senatorial election, is making a fresh run for the Senate in the May 2013 elections.

She has been personally handpicked by the President to run on the Liberal Party-led coalition of the administration.

Hontiveros counts as supporters in the Aquino administration her fellow Akbyan partymates and bigwigs—Secretary Ronald Llamas, presidential political adviser; Secretary Joel Rocamora of the National Anti-Poverty Commission and the agency’s spokesperson; and Chair Loretta Ann Rosales of the Commission on Human Rights.

He disclosed that Akbayan’s campaign during the 2010 elections was funded mainly by contributions from individual sympathizers.

“To be exact, 95 percent of our funds are donations or contributions from other persons. We ensured that the contributions did not come from illegal, unscrupulous, or tainted sources.

He took potshots at leftist party-list groups he did not name, saying: “Unlike our accusers from the extreme Left, contributions to Akbayan’s electoral campaign did not come from illegal  ‘taxes’ forcibly extracted from logging and mining companies under pain of their installations and equipment being burned and their personnel harmed,” he added.