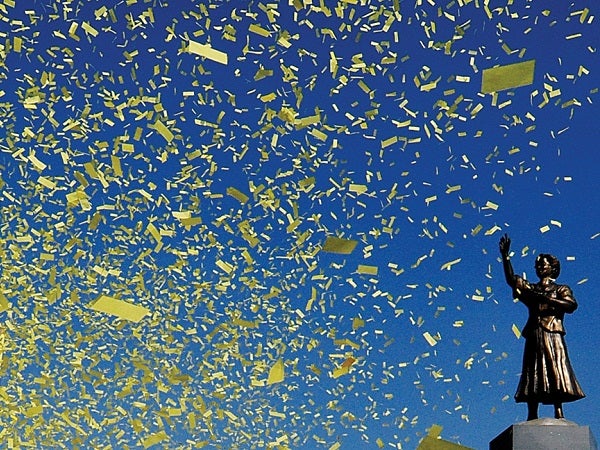 REMEMBER WHEN Like the way it was in the feverish days leading to Edsa (I) People Power Revolution, yellow confetti rains anew on the Cory Aquino Memorial Shrine in Manila as the country commemorated the well-loved former President’s 80th birth anniversary on Friday. (See story below.) RICHARD REYES

Some came in wheelchairs, a few with canes. Many took halting steps with arthritic knees.

But they came, anyway, to pay their respects to the late President Cory Aquino, who would have turned 80 years old on Friday.

In their traditional yellow shirts, members of the Aquino Cabinet and staff in Malacañang from 1986 to 1992, her kin, friends and admirers, joined her children at a Mass shortly before noon by her grave site at the Manila Memorial Park in Parañaque City.

“Don’t worry, you don’t have to do this again,” Ballsy told the crowd in a light-hearted way. She said that, indeed, the former President had given word that when she’s gone, she didn’t want them fussing about her.

But who could have stopped Aquino’s former Bureau of Internal Revenue chief Jose Ong, who came in a wheelchair? Or Maur Aquino-Lichauco, Aquino’s sister-in-law and bosom buddy, who suffered a stroke at the height of the former President’s funeral in 2009?

Lawyer Rene Saguisag, who had been a recluse for a while after surviving a car accident, dropped by with son Rebo and 2-year-old granddaughter Dulcet.

“Look at her, she looks just like Dulce, with long, lustrous eyelashes,” the doting grandpa crowed. He was referring to his late wife, Dulce, a former Social Welfare Secretary who died in a vehicular accident in 2007.

Vice President Jejomar Binay, another Aquino admirer, was the highest-ranking government official in the gathering. Binay was a progressive lawyer who supported the Edsa People Power Revolution that toppled dictator Ferdinand Marcos and catapulted Aquino to the presidency. President Cory named him mayor of Makati in 1986.

“On this day, we remember the birthday of our mother of democracy,” Binay said in a statement. “In celebrating her memory, may we all Filipinos unite as one country in fervently defending the freedoms we obtained. Let us make sure the freedom she and other heroes fought for will also be enjoyed by the next generation.”

Then commander of the Presidential Security Group Voltaire Gazmin, who is now secretary of national defense, was also present.

The late President was born in 1933, which was a Year of the Monkey in the Chinese zodiac.

The Mass was officiated by Aquino’s confidante, Fr. Catalino Arevalo, SJ and Fr. Manoling Franciso, SJ in front of the tombs of the former President and her equally loved husband, former Sen. Benigno “Ninoy” Aquino Jr.

In his homily, Francisco recalled Aquino’s sufferings. “But suffering is … a virtue of attending constantly to the needs of others,” he said.

After the Mass, the YRM also turned over a check for Aklat, Gabay, Aruga, tungo sa Pag-angat at Pag-asa (Agapp) Foundation headed by Pinky Aquino-Abellada. Agapp is a nonstock, nonprofit organization which aims to help construct fully furnished preschool classroom with library (Silid Pangarap) in public schools designated by the Department of Education in depressed and disadvantaged communities.

The tomb of the country’s first woman president was vibrant with yellow flowers and remembrances from those who continue to love her.

Lilies, sunflowers, roses, orchids and Malaysian mums decorated both her tomb and that of her husband.

Throughout the day, visitors would drop by to offer flowers and a few minutes of prayer.

Lyn Dereal, 28, from Quezon City, said she regularly visits the Aquino tombs on the former President’s birth and death anniversaries—a habit she picked up from her parents, who are now in Mindoro.

Dereal said since Aquino passed away, their family flower shop in Quezon City had been commissioned to decorate her tomb with yellow flowers during special occasions.

But Dereal underscored that her visits to the Aquino tombs were more “in remembrance of the democracy they fought for.”

“Cory Aquino’s administration was a big help to our family. It was when we all achieved freedom,” she said in Filipino.

Dereal motioned to her 1-year-old niece, who she brought along during Friday’s visit. “She will be picking up this practice when she grows up,” Dereal said.

At the commemoration at the Cory Aquino Monument in Intramuros, Manila on Friday, more friends and advisers of the former President came to witness the wreath-laying. Among the personalities present were former Sen. Heherson Alvarez, Gazmin, Deedee Siytangco, Teddy Boy Locsin Jr., Justice Adolf Azcuña and Manila Mayor Alfredo Lim.

In a statement read for him by cousin Paolo Benigno “Bam” Aquino IV, President Aquino said her mother would be happy to see the changes taking place today, notably “a steadily growing economy, a government truly dedicated to good governance and public service, and a citizenry filled with newfound optimism.”

But if his mother were alive today, she would be the first to remind him not to rest on his laurels even if the country is “marking success after success, the President said in a message.

Mr. Aquino is in Switzerland for the World Economic Forum.

In Mr. Aquino’s message, he trumpeted the gains of his administration, saying that the Philippines is marking “success after success once more.”

He cited the Bureau of Internal Revenue’s tax collection, which breached the P1-trillion mark for the first time, the signing of a framework agreement with the Moro Islamic Liberation Front, and the world’s “overwhelming confidence” in the country.

The President added that everyone must actively participate to sustain these changes and keep the Philippines forward, a lesson he learned from the events leading to the 1986 People Power Revolution, which toppled the dictatorship of Ferdinand Marcos and brought Cory Aquino to the presidency.

“This is why I believe that everyone has a role in sustaining the changes taking place in the Philippines … There is no action too small or insignificant if, like the actions of the men and women who filled Edsa, it is done out of a desire to right what is wrong,” Mr. Aquino said. With reports from Jerome Aning and Rogelio Medina, contributor