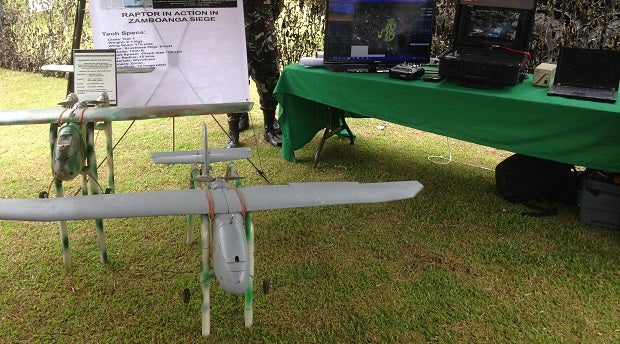 MANILA, Philippines — The Philippine Army showcased to the public its drones at a static display at Camp Aguinaldo as part of the anniversary of the Armed Forces of the Philippines Thursday.

The UAS provides real time imagery intelligence and video feed from a particular area with a range of three to seven kilometers and can extend up to 50 kilometers, Army spokesman Captain Anthony Bacus said.

“It complements the existing Human Intelligence/ Signals Intelligence capability of the Army which is used in surveillance operations and also in humanitarian assistance and disaster response,” he added.

He also said the drones had been “instrumental” in their operations against the Moro National Liberation Front in Zamboanga City last September.

A third drone is in the works, which will be a more enhanced version of the two drones. It will cost P1.5 million.

Other Army assets also showcased at the static display were GARMIN Global Positioning System and a 100mm mortar.

The static display showcased the capabilities and new acquisitions of the military. The Philippine Air Force and the Philippine Navy also put up their own booths.

Read Next
Winnie Monsod: Guards were correct, Binay was wrong
EDITORS' PICK
Legarda emphasizes role of ICC/IPs in nation building this IP month
Work-From-Home is here to stay and requires reliable logistics
DOTr to defend proposal to increase passenger capacity in public transport
Hong Kong to further tighten COVID-19 travel restrictions
Only 4,393 new COVID cases logged due to low number of tests
USAID Opportunity 2.0 calls for applicants for grants for out-of-school youth engagement
MOST READ
Bongbong says PH should modernize infrastructure to become Asia’s next logistics hub
Isko to critics after remarks vs Robredo: I’m sorry, this isn’t about Mr. Congeniality
Pacquiao plays 9-ball with billiards legends Bata Reyes and Django Bustamante
Martires asks why he is being singled out over issues on releasing SALNs
Don't miss out on the latest news and information.