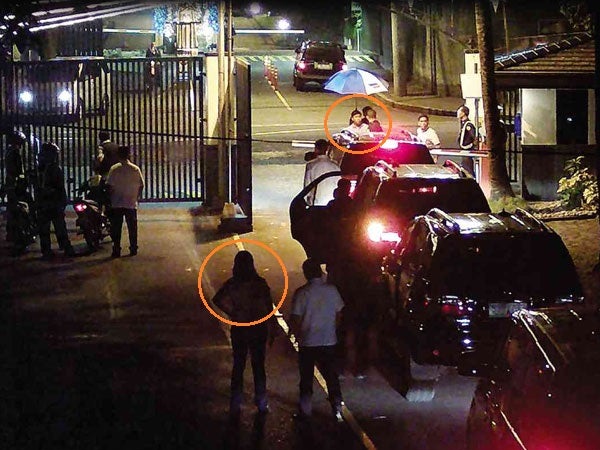 MANILA, Philippines—Makati Mayor Junjun Binay ordered the arrest of three security guards of a posh subdivision in the city when the guards refused to allow his four-car convoy to pass through a restricted gate close to midnight on Nov. 30, according to a source privy to the incident.

The entire incident at the gate of Banyan and McKinley Roads was recorded by the closed-circuit television cameras of North Forbes Park and Dasmariñas Village, the source, who asked not to be identified for fear of reprisal from City Hall, told the Inquirer.

Based on a 24-minute video, a copy of which was obtained by the Inquirer, the standoff was witnessed by the mayor’s sister, Sen. Nancy Binay, a passenger of one of the vehicles.

The siblings are the children of Vice President Jejomar Binay, a former mayor of Makati who has declared he will run for president in 2016.

The mayor came from his sister’s house in Dasmariñas Village when their convoy was not allowed to get past the Banyan Road gate of the village.

The guards of Right Eight Security Inc. did not raise the iron barrier because vehicles are not allowed to pass through the gate after 10 p.m. for security reasons, the source said.

“All vehicles are allowed to pass this gate during the day. They can enter until midnight, but no one is allowed to go out after 10 in the evening,” the source said.

He noted that high-profile residents, such as senators, congressmen, mayors and diplomats, were following village rules.

The source said the mayor’s convoy should have used the Palm Avenue exit, “which is 150 meters away from Banyan Road.”

The video clip showed that the mayor, who was in a polo shirt, stepped out of the lead vehicle after two security guards manning the Banyan Road gate on McKinley Road did not lift the iron barrier to allow the convoy to pass.

“The mayor went down from the lead car and asked the guards, ‘Don’t you know me?’” the source told the Inquirer.

The video also showed Binay stepping away from the guard house toward the side of McKinley Road. He was talking on his cell phone. An aide held an open umbrella for the mayor.

One of the mayor’s security personnel loaded a handgun and cocked it, while another aide of the mayor carried a rifle.

The video also showed the young Binay talking to the two guards a few minutes before policemen in uniform, armed with M-16 rifles, arrived.

It was the Makati policemen who lifted the gate’s barrier and, shortly after, arrested the two guards and Virgilio Robang, the Dasmariñas Village security officer in charge.

The source said the three guards were taken to the Makati City Police headquarters where they were detained for at least four hours.

The video also showed Robang, who arrived on a motorbike, saluting the young Binay, but he was quickly surrounded and disarmed by the mayor’s security personnel.

Before Robang was arrested with the two guards, Binay was seen talking to him with the mayor’s index finger pointed to Robang’s chest.

Supt. Manuel Lucban, Makati City Police head, told the Inquirer in a phone interview that the guards were brought to the police headquarters for verification purposes.

“We wanted to verify if the permits of their firearms were in order and [we did not file] charges. They were eventually released,” Lucban said.

Jay Pantangco, president of the Dasmariñas Village Homeowners Association, confirmed the incident between the guards and Binay. “But this has already been settled,” he said.

Pantangco declined to elaborate on the incident.

“We have instructed our guards to apologize to the mayor and we have started a debriefing session,” Antonio said.

In a text message, Joey Salgado, City Hall spokesman, said the president of Right Eight had sent a letter to Binay and “apologized profusely for the incident.”

Salgado said Pantangco had admitted that “there were lapses in their procedures.”