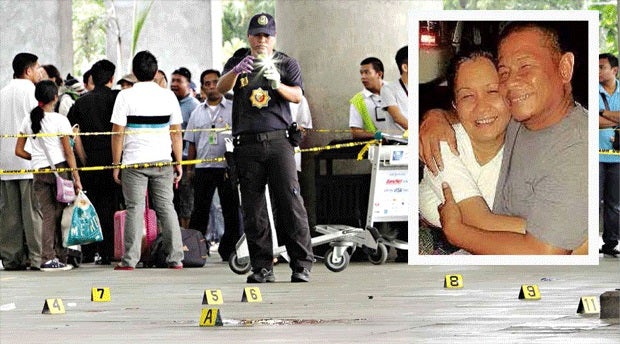 CRIME SCENE A police officer documents the site of the shooting at Ninoy Aquino International Airport Terminal 3, which resulted in the deaths of Mayor Ukol Talumpa and his wife (inset from Facebook), and two others. GRIG C. MONTEGRANDE

ZAMBOANGA CITY, Philippines—Slain Mayor Ukol Talumpa was a political rival of former Mayor Wilson Nandang and one of the causes of their dispute was illegal drugs, a police official said on Friday.

“The drugs issue (usaping droga) was one of the reasons behind their quarrel,” Chief Insp. Ariel Huesca, spokesperson of the Western Mindanao regional police office, told the Inquirer.

Zamboanga del Sur Gov. Antonio Cerilles, an ally of Talumpa, wondered how the shooting could occur in a supposedly secured government facility such as Ninoy Aquino International Airport (Naia).

“He was shot by a person in a police uniform at Naia Terminal 3,” Cerilles said by phone.

“Naia should be more strict in checking the people coming in and out. Imagine the killer was in a police uniform,” he said.

He said Talumpa had only one enemy in Zamboanga del Sur and it was Nandang. Talumpa defeated Nandang in the last local elections.

In a previous interview with the Inquirer, Talumpa called on the government to look deeper into the problem of illegal drugs in his hometown of Labangon, a fourth-class municipality with a population of 2,800.

“Ukol survived many attempts on his life. He was ambushed in Manila. He missed a bomb planted under his car in Pagadian City and he was also ambushed in his hometown,” Cerilles said.

On Nov. 2, 2010,  Talumpa, then vice mayor of Labangan, survived an assassination attempt on Leon Guinto Street in Manila.