The Vice President, in a television interview, called the Inquirer report on the altercation between his son and security guards at Dasmariñas Village on Nov. 30 “distorted.”

“What happened that night was related the following morning to me by Junjun. I said, it was saddening, but it was good that the reaction went well,” Binay said, referring to the settlement of the controversy.

“From what I had gathered, I think it (the Inquirer report) was distorted from what really happened. Moreover, they (the parties) have already explained to each other and cleared the issues,” he added.

“A little courtesy, please, to the mayor,” he said.

He said he did not know if his political enemies were behind the report.

“Why would there be an issue with Senator Nancy? She was just with the convoy,” he said. 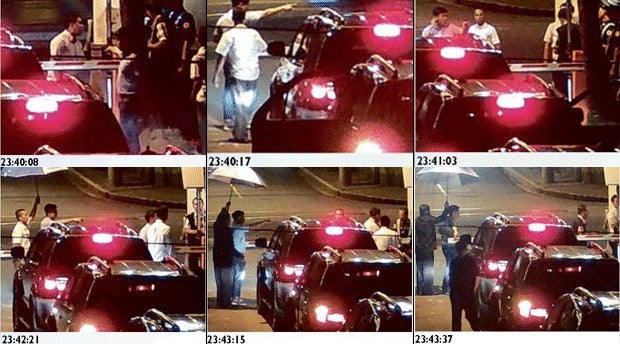 “Dasmariñas Village is not an independent country. I personally believe that the actions of the security guards are uncalled for and that they totally disregarded the authority vested on Mayor Binay as the father and leader of the city,” Gatchalian said.

“As the city mayor, [he has jurisdiction over the entire Makati], including Dasmariñas Village. They should remember that the village is not an independent state and he should be allowed to move freely within the city’s territorial bounds,” he said.

“The security guards should have realized in the first place that they were talking with their mayor and as a matter of showing respect and as a courtesy to him, they should have [quickly allowed him and his group out of the village],” he said.

Gatchalian said it was within Mayor Binay’s discretion to call the police and remove the security bar at the gate.

“If a mayor cannot enter or leave a property within the area of his jurisdiction because of supposed rules and regulations that were drawn and implemented by a group of private individuals, then this would surely diminish his effectiveness as the leader of his town or city,” Gatchalian said.