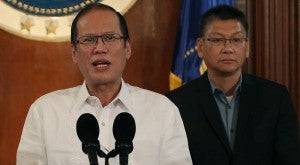 TOKYO—President Benigno Aquino III said here Friday the resignation of his communications strategist, Ricky Carandang, was no cause for concern and asked Malacañang Palace watchers to move on.

“The people in Comm Group have been working with each other for three and a half years. I think there have been a lot of retirements, but like anything else, we can still further improve,” he said.

He made the remarks when he met with members of the Malacañang Press Corps over coffee at the Imperial Hotel here late Friday.

The President was in Tokyo for a summit meeting between among leaders of the Association fo Southeast Asian Nations and Japan during which he also had a series of meetings with Japanese political and business leaders.

He was scheduled to be back in Manila early Sunday.
Aquino denied that his spokesman, Edwin Lacierda, was also on his way out.

According to the President, under the new setup briefings for the Malacañang press corps would be given alternately by Communications Secretary Herminio Coloma, Lacierda and Lacierda’s deputy, Abigail Valte.

“So I guess between the three of them, there’s division of labor,” he said, stressing that what he was after was for all three to “deliver the message correctly, and whoever is the one who [will be the] pointman, that’s for them to decide on.”

No formal reason for Crandang’s resignation was given the public either by the Palace or Crandang himself.

The sudden departure of Carandang does not signal the return to the old setup in Malacañang in which all officials and assets of the media machinery of the government were under the Office of the Press Secretary.

Asked about this, Aquino said he had yet to discuss with Coloma and the rest of the Comm Group if there was still a need for it.

“That’s still subject to discussion. You don’t want to change too many things and cause unnecessary readjustments. If not necessary why change?” he said, adding, “If it ain’t broke, don’t fix.”

Aquino thanked Carandang “for all of the efforts he has done on behalf of our people in our government.”

The President said he appreciated Carandang’s taking a pay cut when he left ABS-CBN in 2010 to serve on his Cabinet.

Carandang, a news presenter, also had a talk show on ANC News Channel.

“A Cabinet secretary makes P95,000, roughly about 40 percent will be the take home (pay). And I am sure he made a lot more in his previous job (but) he committed his three and half years of his life to government service,” said Aquino.

The President was not sure if there was a need to fill the vacancy created by Carandang’s resignation.