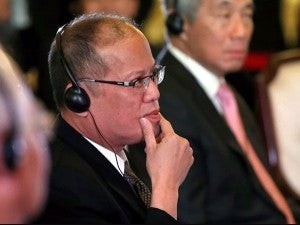 TOKYO – Weighing in on the word war between Interior Secretary Manuel “Mar” Roxas II and Tacloban City Mayor Alfred Romualdez, President Benigno Aquino III said here Friday that Roxas was not at fault when he asked the mayor of the typhoon-stricken city for a clear-cut delineation of roles following the onslaught of Supertyphoon “Yolanda”.

Aquino defended Roxas, who has been locked in a bitter feud with Romualdez over the alleged mishandling of the relief and recovery operations.

At a meeting over coffee with Filipino jounalists covering his visit to Tokyo, the President said it was he who had asked for a document from the Tacloban City government to allow the national government to come in.

“Let’s put it down in writing so that [the division of labor is] sure,” said the President, recalling his conversations with Roxas and Romualdez.

“My conscience is clear,” he said, stressing that his administration did the best it could under the circumstances.

He said that the fight between Roxas and Romualdez was not doing the survivors any good, as the government still had many victims to attend to outside of Tacloban.

“The task really is daunting…. That’s why we are saying it will take about P130 billion to put everybody at least in a better situation than where they were,” said the President.

In a lengthy explanation, Aquino also took pains to rebut the mayor’s claim that Roxas, president-on-leave of the ruling Liberal Party, had politicized the relief efforts for the city.

The Chief Executive said Roxas had been “fair” in dealing with Romualdez, who is allied with Vice President Jejomar Binay, Roxas’ rival in the 2010 election.

Turning the tables on the mayor, the President said: “And, unfortunately, and I think all of you are witnesses, what has transpired is a media war. He has spent time—a lot of interviews—from Day One, as opposed to doing what he is supposed to do.”

The President also noted that the National Disaster Risk Reduction and Management Council law allowed him to remove the mayor if he was “no longer able to function,” but he said did not do so.

“What were the options before me? The NDRRMC law actually empowers me to remove him on advice of the National Disaster Risk Reduction Management Council that he is no longer able to function,” he said. “The bottom line is they are in charge, they are the primary responders and if they are no longer able to discharge their functions then it is national government’s responsibility to fill the void.”

On hindsight, he said, had he removed Romualdez, his administration would have been criticized for persecuting “the Romualdezes who are allied with the Marcoses.”

The mayor is a scion of the political clan of former First Lady Imelda Marcos.

“So let’s bend over backwards. We asked the local government to make specific requests so we would not be accused of not doing our jobs,” Aquino said.

Thus, when Aquino met the mayor, he told him: “Can you tell us what you are still capable of doing and commit to that? Then tell us everything else that you need and we put it all down in writing so both of us know what is expected of the other.”

A draft of the document was then prepared but this was not signed by the mayor.

Aquino said he instructed officials  “to understand” the mayor because he had “psychological issues and emotions brought about by this tragedy.”

But the President decried the claim that the national government had tried to “usurp his authority.”

“Since he is not an ally… I will not even discount [that] some people have advised him that ‘if you step aside, effectively, you’ve resigned already,’ and that was not  the intention,” said the President. “And that was I guess what Mar Roxas was trying to avoid.”
Aquino quoted Romuladez as telling him during the last time they met: “You know, please understand, I went through a traumatic experience. I may have said hurtful things and that was never the intention. We want to cooperate with you for the betterment of our people.”

Aquino said it was he who accelerated the reopening of banks in the city and sent soldiers on a C-130 transport plane to clear the airport of debris on November 9.

“Why were there massive clearing crews in Tacloban? I ordered that,” he said, adding that he also sent thousands of police officers and soldiers to the city and neighboring areas.

Aquino said he found it strange that the mayor was “heightening the justification that (Tacloban) was left on its own because I’m an Aquino and they’re Romualdez.”

Why the mayor cried